16 August 2012
As fighting rages on in Syria, conditions have not been met to continue the mission of the United Nations observer force there, but Security Council members, meeting on the situation this morning, have agreed to the creation of a liaison office to support efforts for a political solution to the conflict and respect for human rights, a top official of the world body said today.

“The mission will come to an end on midnight on Sunday,” Assistant Secretary-General for Peacekeeping Operations Edmund Mulet told correspondents after briefing the 15-member body in closed consultations on the future of the UN Supervision Mission in Syria (UNSMIS) and the letter of Secretary-General Ban Ki-moon proposing a continued UN presence in the form of a liaison office.

“In the meantime, we’re working with our colleagues in the Department of Political Affairs to prepare the ground in Damascus to establish this liaison office,” Mr. Mulet added.

Syria has been wracked by violence, with an estimated 17,000 people, mostly civilians, killed since the uprising against President Bashar al-Assad began some 17 months ago. In the previous two weeks, there have been reports of an escalation in violence in many towns and villages, as well as the country’s two biggest cities, Damascus and Aleppo.

Initially set up in April for 90 days, UNSMIS’ mandate was extended for another 30 days in late July when the Council adopted resolution 2059. That resolution also indicated that further renewals to UNSMIS’ mandate would be possible only if it could be confirmed that the use of heavy weapons had ceased and a reduction in violence by all sides was sufficient to allow the mission to implement its mandate.

With the 30-day extension, the mission’s mandate is set to expire on Sunday.

“There was a general feeling that the conditions to continue UNSMIS were not fulfilled, but there was also a consensus about the need of keeping a UN presence in Damascus,” Gerard Araud, Permanent Representative of France, which holds the Council’s presidency this month, told correspondents before Mr. Mulet spoke.

“On the basis of this consensus, as President of the Security Council, I sent a letter to the Secretary-General to tell him that we take note of his letter and in fact we agree with his proposal of creating a liaison office in Damascus,” Mr. Araud said.

In his letter, Mr. Ban acknowledged that the conditions to continue the mission had not been achieved, but stressed that the UN cannot discontinue its assistance to the Syrian people in helping to find an end to the crisis.

“I think it is imperative for the United Nations to have a presence in Syria that can work in other areas to support me in utilizing my good offices, in particular, to support the work of the Joint Special Envoy in mediating and facilitating a peaceful resolution to the crisis,” Mr. Ban wrote.

“I intend therefore to work in the immediate future towards establishing an effective and flexible United Nations presence in Syria,” the Mr. Ban said.

Both Mr. Araud and Mr. Mulet stressed the desired flexibility of the new structure. Mr. Mulet said that, in order not to have a gap in Damascus, staff already on the ground, who could work in the new office, were already being identified.

“UNSMIS will fade out, but there will be a UN presence,” Mr. Araud said.

UN concerned over forced displacement of Palestinians by Israeli authorities 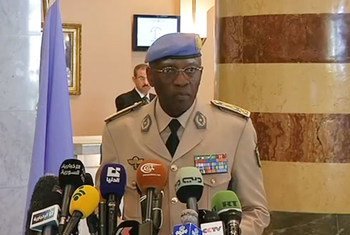 13 August 2012
Violence and the indiscriminate use of heavy weapons by the Government as well as targeted attacks by the opposition are increasing in Syria, the head of the United Nations observer force said today, adding that this is taking a heavy toll on innocent civilians.