Secretary-General Ban Ki-moon is seriously concerned about delays in the selection of the new Somali Parliament, according to a statement issued by his spokesperson today.

Secretary-General Ban Ki-moon is seriously concerned about delays in the selection of the new Somali Parliament, according to a statement issued by his spokesperson today.

“Recent acts of intimidation and violence… should not continue or be allowed to threaten the successful conclusion of Somalia’s transition,” the spokesperson said. “He calls upon the Somali political leadership, the traditional Elders and other parties to rise above their differences and to act in the best interest of the Somali people.”

After decades of warfare, Somalia has been undergoing a peace and national reconciliation process, with the country’s Transitional Federal Institutions implementing the Roadmap for the End of Transition, devised last September. The Roadmap spells out priority measures to be carried out before the current transitional governing arrangements end on 20 August.

At a meeting in Nairobi, Kenya, in July, Somali leaders and representatives gathered to discuss a number of outstanding issues and to finalize agreements, including the establishment of a National Constituent Assembly (NCA), which would adopt the East African nation’s new constitution in line with the roadmap.

The Horn of Africa’s new draft constitution was approved in early August, and will be submitted to the NCA, which will represent the full spectrum of Somali society, and which will be selected by a group of 135 traditional Somali Elders representing all of Somalia’s clans in accordance with the ‘4.5 formula’ used to apportion roles in government such as parliamentary seats. In addition, a so-called Technical Selection Committee will play a key role in selecting Members of the country’s new Parliament.

“The Secretary-General emphasizes that the work of the Elders must proceed in a manner free from intimidation, coercion and corruption,” Mr. Ban’s spokesperson said. “Likewise, the Technical Selection Committee must be allowed to perform its duties independently and impartially, without fear of reprisal. The outcome of its work must be respected.”

He added that the UN chief has been encouraged by the progress achieved in Somalia's political process, and stresses that this progress must not be lost.

“The Somali people expect and deserve a credible, inclusive and transparent end to the transition, delivered in a timely manner, in accordance with the Garoowe Principles, which is the only hope for a stable future for all Somalis,” the spokesperson said, referring to a set of agreements reached between Somalia’s Transitional Government and a range of stakeholders on the country’s political arrangements. 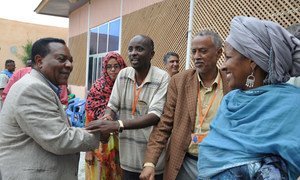 The United Nations top political official for Somalia today welcomed a presidential decree on the Horn of Africa country’s National Security and Stabilization Plan (NSSP), while the Security Council has welcomed the recent progress Somalia has made in progressing towards the end of its temporary governing arrangements.