The President of the General Assembly, Nassir Abdulaziz Al-Nasser, today expressed his deep sympathy with the Government of Iran for the loss of hundreds of lives and the destruction caused by the earthquakes that struck Iran on Saturday afternoon.

“President Al-Nasser extends his condolences to the families and friends of those who have been killed in this disaster and wishes a speedy recovery to those who were injured,” added a statement issued by Mr. Al-Nasser’s spokesperson.

The earthquakes reportedly left at least 250 people dead and more than 2,000 injured, causing damage to more than 100 villages. While relief operations are underway, they have reportedly been made difficult by the dozens of aftershocks that followed the two major seismic events.

Mr. Al-Nasser also reiterated the need for all Member States to do more in the area of disaster prevention and response, which is a key issue that was covered in a previous General Assembly session.

Yesterday, Secretary-General Ban Ki-moon said he was deeply saddened by the incident and reiterated the UN’s readiness to respond to humanitarian needs created by the disaster and to mobilize international support for this end. 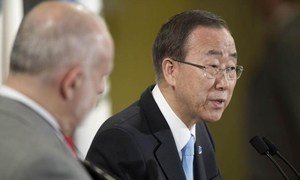 Secretary-General Ban Ki-moon today said he was deeply saddened by the loss of hundreds of lives and the destruction caused by the earthquakes that struck northwestern Iran on Saturday afternoon.