J. Gutierrez/IRIN
Four young children are rescued with the use of inner tubes at a flooded riverside community in Manila.
13 August 2012

The United Nations food relief agency is supporting the Government of the Philippines to help the hundreds of thousands of people who have been affected by heavy rains over the past week.

“WFP is saddened by the humanitarian impact of the non-stop rains over the last week in the Philippines, and we would like to reiterate our solidarity with the Philippine Government during times of emergencies,” the World Food Programme’s (WFP) representative to the Philippines, Stephen Anderson, said in a news release.

The agency is providing food and logistical support to complement the Government’s emergency relief efforts. So far, it has delivered 52.5 tons of high-energy biscuits for distribution to some 262,500 flood-affected people in various regions, including those which the Government has identified as the most flood-affected.

High-energy biscuits are wheat-based biscuits fortified with vitamins and minerals. They are often distributed during the first few days of an emergency, when people have limited access to cooking facilities.

In addition, WFP is contracting trucks to help transport Government relief supplies to affected communities in Central Luzon, a region on the northern island of Luzon, the national capital region of Metro Manila, and neighbouring regions.

In the coming days, WFP will also distribute nutritious ready-to-use supplementary food to about 77,000 flood-affected children under the age of three on the northern island of Luzon, in partnership with the Philippines’ Department of Health. 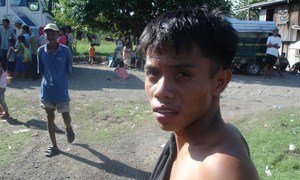 The United Nations is providing training for young people to become entrepreneurs in the Philippines as a way to reduce poverty and stop the labour force from migrating to other countries.