9 August 2012
A United Nations independent expert today called on the Government of Colombia to advance the dialogue process with indigenous authorities in the state of Cauca to find a solution to the recent military presence in their territory and other related matters.

“I encourage all parties to boost their efforts so they can achieve progress in this dialogue process,” said the Special Rapporteur on the rights of indigenous people, James Anaya. “The process must advance in a spirit of good faith and looking for solutions that comply with human right laws.”

The dialogue process started after leaders of the Nasa tribe, in the northern part of Cauca, started measures to expel Government military forces as well as members of the Revolutionary Armed Forces of Colombia (FARC), which were occupying their territory. According to reports, the military and FARC forces had clashed in the area over previous days, destroying indigenous property and injuring several people.

Mr. Anaya cited the right of indigenous peoples to have autonomy over their land and the need to consult with their authorities before establishing any military presence there, in line with the UN Declaration on the Rights of Indigenous People.

Adopted by the General Assembly in 2007, the Declaration recognizes indigenous people’s right to self-determination and their right to freely pursue their economic, social and cultural development, and develop past, present and future manifestations of their culture in various forms.

The Special Rapporteur called on the Government and Nasa authorities to act swiftly to ensure the safety of the indigenous people in the area, while respecting their rights to freedom of expression and association.

“It is essential to take all the necessary measures to avert the patterns of violence that affect indigenous people and ensure that the presence of the military does not contribute to generate situations which might put them in danger,” he said.

Mr. Anaya also acknowledged the complexity of the situation, particularly taking into account the Government’s responsibility to maintain public order while complying with the demands of indigenous people requesting safety and respect for their institutions and authority. 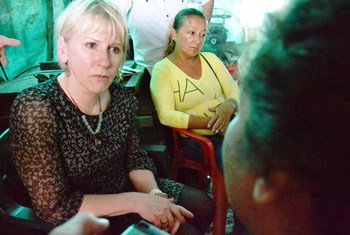 21 May 2012
Colombia must increase its efforts to fight impunity for crimes of sexual violence, a United Nations envoy said today, adding that such efforts should be paired with assistance to survivors and victims.