9 August 2012
The Security Council has voiced its support for the role that preventive diplomacy and early warning mechanisms play in settling disputes peacefully, and praised the work carried out by a United Nations centre in Central Asia to strengthen this practice in the region.

“The members of the Council reaffirmed the importance of preventive diplomacy and early warning mechanisms in the peaceful settlement of disputes and underlined the overriding political, humanitarian and moral imperatives, as well as the economic advantages, of preventing the outbreak, escalation or relapse of conflicts,” according to a press statement issued on Wednesday night by Ambassador Gérard Araud of France, which holds the Council’s presidency for this month.

The Council’s statement came in the wake of a briefing by the Secretary-General’s Special Representative, Miroslav Jenca, on the work of the UN Regional Centre for Preventive Diplomacy for Central Asia (UNRCCA) – which Mr. Jenca also heads.

Established in 2007 at the initiative of the governments of the five Central Asian countries and based in Ashgabat, the capital of Turkmenistan, UNRCCA is a special political mission which works to promote dialogue between the region’s governments in finding solutions for emerging problems and eliminating potential threats.

The Council members emphasized the need to increase cooperation and coordination among governments in Central Asia, and welcomed UNRCCA’s work over the past seven months to achieve this goal.

“In this regard, they welcomed the role of the Regional Centre as an example of preventive diplomacy mechanisms available to the United Nations and acknowledged the role played by UNRCCA in assisting Central Asian countries to respond, in accordance with its mandate and through regional cooperation, to domestic and trans-national threats to peace and sustainable development of the region,” Ambassador Araud said.

Council members also commended the Centre’s focus on supporting efforts by the region’s governments to ensure stability and create a more conducive environment for bilateral and multilateral cooperation, as well as to find sustainable solutions to challenges in Central Asia, including the management of water and energy resources and the implementation of the UN Global Counter-Terrorism Strategy.

They encouraged continued cooperation and coordination between governments in the region, UNRCCA and relevant regional organizations, and, in addition, they noted that the regional centre can play an important part by assisting Central Asian countries to normalize the situation in Afghanistan, which affects the entire region. 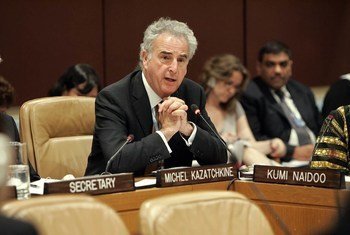 20 July 2012
Secretary-General Ban Ki-moon has appointed Michel Kazatchkine as his Special Envoy for HIV/AIDS in Eastern Europe and Central Asia, one of only two regions in the world where HIV is continuing to grow.