7 August 2012
The United Nations humanitarian chief today discussed ways to boost relief efforts to the more than 270,000 people that have been displaced from their homes by violence in the Democratic Republic of the Congo’s (DRC) North Kivu province.

“Thousands of people are looking for help and support from their Government and the humanitarian community,” said the Under-Secretary-General for Humanitarian Affairs and Emergency Relief Coordinator Valerie Amos, who is currently on a three-day visit to the Central African country.

According to the UN Office for the Coordinator of Humanitarian Affairs (OCHA), fighting in DRC’s North Kivu province has led to the displacement of more than a quarter of a million people in recent weeks, including tens of thousands across the borders into Rwanda and Uganda.

Since 2009, armed conflict in the eastern part of the country has internally displaced some 2.2 million people out of which 656,000 are in North Kivu.

During her visit Ms. Amos met with Congolese Prime Minister Augustin Matata Ponyo Mapon in Kinshasa, the capital, where they discussed the increased insecurity in North Kivu which and the ways in which the Government can help the relief effort.

“Despite the extremely difficult conditions, aid agencies are delivering assistance to affected people in North Kivu, but we need to do more. To increase our response we need to reach those who need help. Insecurity and poor roads are hampering our efforts,” Ms. Amos said.

After Kinshasa, Ms. Amos travelled to the North Kivu, where she met with province officials and discussed the urgent need for food, health care and shelter in displaced communities. She also met humanitarian organizations in the area to hear about the ongoing relief efforts and the remaining challenges.

In a news release, OCHA said the current relief efforts are hampered by lack of funding. Of the $791 million needed this year to respond to the humanitarian challenges in the DRC, only $341 million have been received.

“While it is clear that there are competing humanitarian demands around the world, we must not forget the people of the Democratic Republic of the Congo,” Ms. Amos said. “They are in the midst of one of the most complex humanitarian crises in the world and deserve our continued support.”

Ms. Amos will end her visit to the DRC tomorrow and is expected to travel to Rwanda on Thursday, where she plans to visit a camp hosting Congolese refugees. 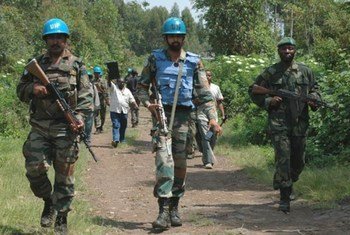 2 August 2012
The Security Council today reiterated its demand that the group of renegade soldiers known as the 23 March Movement (M23) immediately cease efforts to destabilize the eastern part of the Democratic Republic of the Congo (DRC), and voiced their deep concern at the worsening humanitarian situation in the region.