The United Nations envoy in Côte d’Ivoire has strongly condemned today’s attack against a military base in Abidjan that left seven soldiers from the national army dead and seriously injured another dozen troops.

An unidentified armed group attacked the military camp of the Forces républicaines de Côte d’Ivoire (FRCI) in the neighbourhood of Akouédo around 3:30 a.m., according to a news release issued by the UN Operation in Côte d’Ivoire (UNOCI). The group reportedly took arms and ammunition from the armoury before leaving the camp.

“The provisional toll of the attack is seven dead and about a dozen seriously injured among the ranks of the FRCI,” UNOCI stated. It added that the Secretary-General’s Special Representative and head of UNOCI, Bert Koenders, strongly condemned the attack, as well as the others carried out at the weekend against the Ivorian defence and security forces.

UNOCI has sent peacekeepers to help reinforces the FRCI in its efforts to secure the camp and its surrounding areas, as well as the main road leading to the camp.

In the aftermath of the post-election violence that followed the 2010 presidential polls, the mission is assisting the West African with a number of key tasks, including the restoration of law and order, national reconciliation, the holding of legislative elections, and economic recovery. 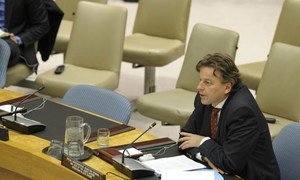 Côte d’Ivoire is making significant advances towards peace, stability and development but will need the continued support of the Security Council as it tackles important challenges, including a volatile security situation and national reconciliation, a top United Nations official said today.