IRIN/Khine Thurein
Two men sit under the the remnants of their homes in Sittwe, the provincial capital of Myanmar's western Rakhine State.

5 August 2012
Myanmar needs to tackle serious human rights challenges for democratic transition and national reconciliation to succeed, an independent United Nations human rights expert said at the end of a six-day visit to the country.

Tomás Ojea Quintana, the Special Rapporteur on the human rights situation in Myanmar, noted a number of positive developments during his 30 July to 4 August visit, including the increasing engagement of civil society, political parties and other stakeholders in the reform process, greater openness in discussing human rights issues, and efforts towards building a society based on the rule of law.

Clashes between Buddhist and Muslim communities in Rakhine state reportedly killed at least 78 people and displaced thousands in June.

“The human rights situation in Rakhine state is serious,” said Mr. Ojea Quintana, who witnessed the suffering of people who have lost their homes and livelihoods as a result of the violence.

In a statement issued yesterday, the expert called for a credible, independent investigation into allegations of serious human rights violations committed by State actors in Rakhine, including the excessive use of force by security and police personnel, arbitrary arrest and detention, killings, the denial of due process guarantees and the use of torture in places of detention.

“It is of fundamental importance to clearly establish what has happened in Rakhine state and to ensure accountability. Reconciliation will not be possible without this, and exaggerations and distortions will fill the vacuum to further fuel distrust and tensions between communities,” he said on Saturday prior to leaving the country.

Urgent attention was also required to address the immediate humanitarian needs of the displaced, particularly in the larger camps, he said, urging the international community to respond to Myanmar authorities' appeal for increased assistance.

He also stressed the need for the Government to develop a longer-term strategy for rehabilitation and reconciliation – one that is based on integration and not separation of the Rakhine Buddhist and Rohingya communities.

He interviewed six UN staff members, in Insein and Buthidaung prisons, who have been detained in connection with the events in Rakhine State, adding that he had also received information that a number of staff of international non-governmental organizations had been similarly detained.

“Based on my interviews, I have serious concerns about the treatment of these individuals during detention,” said the Special Rapporteur, who called for their immediate release, adding that the charges against them are “unfounded” and that their due process rights have been denied.

Welcoming the ceasefire agreements reached with 10 ethnic armed groups, and the ongoing dialogue in this regard, Mr. Ojea Quintana said that efforts towards finding a durable political solutions to the conflicts should be accelerated and should address long-standing grievances and deep-rooted concerns amongst ethnic groups.

“Yet, as a result of ongoing conflict, particularly in Kachin State, I continue to receive allegations of serious human rights violations committed, including attacks against civilian populations, extrajudicial killings, sexual violence, internal displacement, and torture. Furthermore, I received allegations of the use of landmines, the recruitment of child soldiers, as well as forced labour and portering committed by all parties to the conflict,” he said.

He reiterated the need to address these allegations as a matter of priority, as well as grievances from decades of human rights violations.

The Special Rapporteur called on Myanmar to ensure that a human rights-based approach is firmly embedded in its economic and social development, especially given the increase of foreign investment. 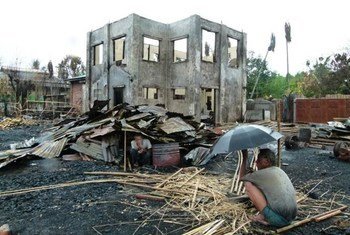