UN Photo/Fabrice Arlot
John Ging, Director of Operations at the UN Office for the Coordination of Humanitarian Affairs.

3 August 2012
A senior United Nations relief official today praised the progress made by the Sri Lankan Government in resettling over 440,000 people since the end of the civil war three years ago, and called for continued donor support for the country, where many people still lack basic services.

“The scale of what Sri Lanka has accomplished over the past three years – the pace of resettlement and the development of infrastructure – is remarkable and very clearly visible,” said the Director of Operations of the UN Office for the Coordination of Humanitarian Affairs (OCHA), John Ging, who just finished a three-day visit to the country.

Sri Lankan Government forces declared victory over the rebel Liberation Tigers of Tamil Eelam (LTTE) in 2009, bringing to an end a conflict that had raged on and off for nearly three decades and killed thousands of people. Large numbers of Sri Lankans were living as internally displaced persons (IDPs), especially in the country’s north, when the war ended.

Mr. Ging expressed his support for continued partnership with the authorities to jointly agree on and meet remaining humanitarian needs. He also welcomed the commitment of the Government to address peace and development issues through the country’s Lessons Learnt and Reconciliation Commission.

During his visit, Mr. Ging met various Government officials and travelled to the Jaffna district in the north, where he met people who remain displaced after more than two decades. He also visited the town of Thellipalai, where he spoke to people returning to the land and houses they had fled 20 years ago and are now struggling to rebuild their lives as the homes they are returning to are uninhabitable.

“In 2012, it is absolutely unacceptable that tens of thousands of people are living in such appalling conditions without access to the most basic services,” Mr. Ging said.

Despite these urgent needs, OCHA stated that humanitarian partners are downsizing due to funding shortfalls. Only 18.4 per cent of the funds required under the Joint Plan of Assistance to the Northern Province for this year have been received to date.

“This is a critical moment for Sri Lanka,” Mr. Ging said. “I appeal to all donors, including those who have already been so generous with their bilateral and development aid, to increase their humanitarian contributions. We need their help to restore dignity and hope for those who have endured and lost so much and now urgently need support in rebuilding their lives.” 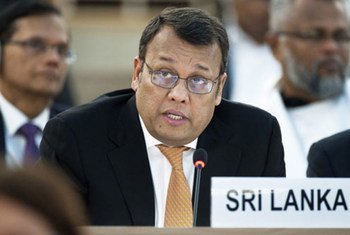