UNHCR/F. Juez
On average, Lebanon receives more than 500 Syrians an hour. Recent arrivals have headed to cities like Tripoli in northern Lebanon.

3 August 2012
As the fighting in Syria continues unabated, the General Assembly today adopted a resolution condemning the increasing use of heavy weapons by authorities and urging all sides to immediately cease armed violence.

As the fighting in Syria continues unabated, the General Assembly today adopted a resolution condemning the increasing use of heavy weapons by authorities and urging all sides to immediately cease armed violence.

The resolution, presented by the Arab Group, was adopted by a vote of 133 in favour to 12 against with 31 abstentions, and comes two weeks after the Security Council failed to agree on collective action to help stop the bloodshed.

It condemns “the increasing use by the Syrian authorities of heavy weapons, including indiscriminate shelling from tanks and helicopters, in population centres and the failure to withdraw its troops and the heavy weapons to their barracks…”

The 193-member body also condemned all violence, “irrespective of where it comes from,” and demanded that all parties implement the relevant Security Council resolutions to achieve a cessation of armed violence in all its forms by all parties.

Secretary-General Ban Ki-moon once again voiced his regret over the divisions that have paralyzed action in the Security Council, adding that the immediate interests of the Syrian people must be paramount over any larger rivalries of influence.

“The conflict in Syria is a test of everything this Organization stands for,” he told the meeting. “I do not want today’s United Nations to fail that test.”

He warned that, despite repeated verbal acceptances of the six-point plan presented by the Joint Special Envoy for the UN and the League of Arab States for the Syrian Crisis, Kofi Annan, both the Government and the opposition continue to rely on weapons, not diplomacy, in the belief that they will win through violence.

In addition, the city of Aleppo is currently the epicentre of a “vicious” battle between the Syrian Government and those who wish to replace it, said the Secretary-General. “But there are no winners in Aleppo today, nor anywhere else in the country. The losers in this escalating battle are the people of Syria.”

Mr. Ban stressed that united international pressure can make a difference. “All of us have a responsibility to the people of Syria. We must use all of the peaceful means in the UN Charter to help them unite around a Syrian-led transition process that is based on dialogue and compromise, not bullets and arrests.”

He added that the primary responsibility for stopping the violence rests with those on the ground, particularly the Government. “But their refusal to lay down arms does not absolve the rest of us of the need to act. I urge all members of this Assembly to face up to the collective responsibilities we shoulder.”

Assembly President Nassir Abdulaziz Al-Nasser also voiced deep regret that the Security Council had again been unable to unite and take collective action to put an end to the crisis, stating that the deadlock in the Council “sends the wrong signals to all parties in the Syrian conflict.”

Given that the six-point plan is not being implemented and that the violence is increasing, Member States have no choice but to take the necessary credible action, he said. “The credibility of the United Nations is at stake; regional stability in the Middle East is at stake. The lives of thousands of innocent people depend on our response.”

In a separate statement issued by his spokesperson, Mr. Al-Nasser called for the full implementation of the Assembly resolution, whose adoption “shows that the UN will not tolerate the suffering of the Syrian people.”

Yesterday Mr. Annan announced that he will not continue on as the Joint Special Envoy past the end of August. The Secretary-General said that while a successor is being sought to replace Mr. Annan, mediation can only succeed where there is a commitment to solving conflict through dialogue and real leverage to back it up.

The UN High Commissioner for Refugees (UNHCR) reported today that more and more people are being forced to abandon their homes to seek safety as the violence continues, with hundreds of thousands having already fled to neighbouring countries.

“Those most difficult to aid – as many as 1.5 million – remain in Syria, uprooted and taking refuge in host families or makeshift shelters. Many others are trapped, fearing the risk of being caught up in fighting or targeted during escape,” UNHCR spokesperson Melissa Fleming told a news conference in Geneva.

UNHCR, through the help of the Syrian Arab Red Crescent, continues to deliver basic materials to enable families to set up makeshift homes, but access to people in need remains the most significant problem.

“With insecurity rising dramatically in Aleppo, terror is gripping the population and humanitarian aid is desperately needed,” said Ms. Fleming, who added that, in Damascus, explosions were witnessed in several neighbourhoods and violence is spreading.

The UN Children’s Fund (UNICEF) stressed the need to protect children, who continue to bear the greatest brunt of the ongoing tragedy in Syria.

“As the eyes of the world focus on the mounting violence in Syria, we must not overlook the fact that while children are not responsible for this tragedy, they’re paying a terrible price,” said UNICEF Executive Director Anthony Lake. “Children are losing their lives, losing their homes, losing their parents and losing their schooling. UNICEF supports people of conscience everywhere calling on all parties to do everything in their power to protect the innocents.” 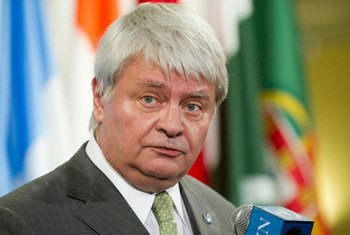 2 August 2012
The United Nations peacekeeping chief today highlighted the ongoing fighting in the city of Aleppo, noting that UN observers continue to try to carry out their work as the “spiral of violence” throughout Syria increases.