The United Nations today urged Sudan to launch an independent investigation into the reported use of excessive force by Government security forces during a protest in Darfur on Tuesday, which resulted in eight deaths and injured more than 50 people.

According to eyewitnesses, security forces opened fire at demonstrators in Nyala, the capital of South Darfur, and used tear gas, killing eight people, five of whom were young students aged 17 and below.

“We urge the Government to promptly launch an independent and credible investigation into the violence and the apparent excessive use of force by security forces,” the spokesperson for the Office of the High Commissioner for Human Rights (OHCHR), Ravina Shamdasani, told reporters in Geneva.

Media reports state that the population was protesting against rising prices in Sudan’s western Darfur region after the Government announced a cut in fuel subsidies and other austerity measures last month.

“There are key international guidelines that must be respected in handling protests so that the legitimate right of people to freedom of expression and assembly are fully respected,” Ms. Shamdasani said. “We call on the Government to unequivocally condemn excessive use of force to suppress protests, and to hold accountable those who were responsible for the fatalities and injuries.”

High Commissioner for Human Rights Navi Pillay had earlier called on Sudanese authorities to ensure that demonstrations are allowed to proceed peacefully and for restraint from all sides.

“We also call again on the Government to immediately and unconditionally release those who have been detained for merely exercising their rights to freedom of assembly and expression,” Ms. Shamdasani said, adding that human rights staff of the UN-African Union peacekeeping mission in Darfur (UNAMID) will continue to monitor the situation.

Deployed at the beginning of 2008, UNAMID is tasked with protecting civilians, promoting an inclusive peace process and helping ensure the safe delivery of humanitarian assistance across Darfur, an arid region on Sudan’s western flank. 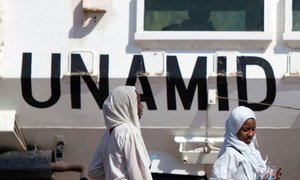 The Security Council today extended for another year the mandate of the joint United Nations-African Union peacekeeping force in Darfur, and demanded that all parties to the conflict in the Sudanese region immediately end violence and work towards a comprehensive peace settlement.