Projects from Australia, Bangladesh, Colombia, India, and Kenya that inspired and galvanized environmental action are the winners of this year’s World Environment Day Challenge, the United Nations announced today.

Projects from Australia, Bangladesh, Colombia, India, and Kenya that inspired and galvanized environmental action are the winners of this year’s World Environment Day Challenge, the United Nations announced today.

The UN Environment Programme (UNEP) challenged people across the world to pledge an environmental activity for the chance to win a Kia Motors fuel-efficient car in connection with this year’s World Environment Day, which was observed on 5 June.

“Today we celebrate five inspiring projects, submitted for the World Environment Day 2012 challenge, that illuminate the pathway to a transition to a green economy,” said UNEP’s Executive Director, Achim Steiner.

“The most environmentally friendly travel is by train, bus, carpooling, cycle or on foot, but in some countries making an eco-friendly project happen may need a private vehicle. If so, it should be fuel-efficient,” he added. “This is why we are awarding such vehicles to these projects, most of which are run in developing nations with underdeveloped public transport networks.”

Among the winners is Fundacion Ecoprogreso, a group in Colombia that works to protect a mangrove lagoon surrounding the city of Cartagena, organized activities for the Day to raise awareness of the importance of the mangrove ecosystem for the local green economy, especially for ecotourism and sustainable fishing.

Maji Mazuri Centre International, located in Nairobi, runs an initiative called Green Heroes, in which youth focus on organizing and improving waste management in the Kenyan capital’s informal Mathare settlement. Among its events for World Environment Day were a communal clean-up day and a football match that galvanized over 2,000 people.

On Australia’s Sunshine Coast, the World Environment Day Festival is held annually to raise awareness of environmental issues and the unique flora and fauna of the region, as well as promote the adoption of sustainable lifestyles and technologies. It is organized by the Sunshine Coast Environment Council, another winner of this year’s challenge.

The fifth winner, Hand in Hand India, a development organization in the southern city of Chennai, brought together over 500 volunteers to create a colourful 10,000 square foot Rangoli carpet depicting 10 environmental themes. Rangoli is a hand-drawn Indian art which adorns the courtyards of many houses.

Observance of World Environment Day began in 1972 as a way to raise awareness of the environment and encourage political attention and action. This year’s theme for the Day – ‘Green Economy: Does it include you?’ – sought to underscore the need for everyone to play a part in keeping humankind’s ecological footprints within planetary boundaries. 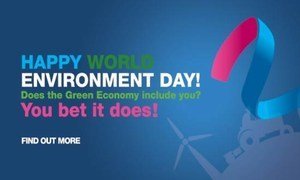 Marking World Environment Day, United Nations officials today highlighted the need for a change in thinking and approach to ensure the sustainability of the Earth’s resources as the world population grows.