Africa needs to embrace economic diversification as well as focus on agribusiness to lift the continent out of poverty and put it on the path to prosperity, a senior United Nations official said today.

“Agriculture is the most important sector of the African economy and will have to be its driving engine out of poverty. It accounts for 65 per cent of the continent’s employment and 75 per cent of its domestic trade,” the Director-General of the UN Industrial Development Organization (UNIDO), Kandeh K. Yumkella, said in a news release.

He added that Africa is also urbanizing at a fast rate, noting that “in order to turn bright prospects into employment opportunities for its young people, Africa needs to embrace economic diversification.”

Mr. Yumkella’s comments came at the Africa Caucus Meeting in Kinshasa, the capital of the Democratic Republic of the Congo (DRC), which brought together Africa’s finance ministers, central bank governors, and representatives of international development agencies and financial institutions and where he was a keynote speaker.

The Director-General stressed the need to boost agricultural productivity to achieve sustainable industrial and agribusiness development as a means of wealth and job creation.

“The transformation of agricultural raw materials into industrial products depends increasingly on the capacity of African entrepreneurs to participate and compete in global, regional and local value chains.

He added that Africa needs “new learning and innovation systems involving regional cooperation, new types of partnerships between farmers, sellers, investors and researchers, and the right incentives and public actions that crowd-in rather than crowd-out private investment.”

Investment in transport infrastructure, access to energy and water, information and communication technologies and management efficiency were vital for agribusiness to thrive, he noted.

In 2012, in partnership with the UN Food and Agriculture Organization (FAO) and the International Fund for Agricultural Development (IFAD), UNIDO launched the Accelerated Agribusiness and Agro-industries Development Initiative, or 3ADI, to promote value addition to agricultural commodities. The initiative is now operational in 12 African nations.

♦ Receive daily updates directly in your inbox - Subscribe here to a topic.
♦ Download the UN News app for your iOS or Android devices.
Africa|econom 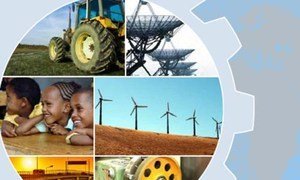 African countries must pursue structural transformation to sustain growth, create jobs and reduce vulnerability to external shocks, says a United Nations report released today, while another publication urges governments on the continent to do this in a way that protects the environment.