The United Nations Economic and Social Council (ECOSOC) today wrapped up four weeks of high-level engagement and dialogue, review and deliberation, and decision-making on issues such as unemployment, women’s empowerment and information technology.

“Indeed, there is much to commend all-around,” the Under-Secretary-General for Economic and Social Affairs, Sha Zukang, said as he addressed the closing session.

“From the Council’s High-level Segment, with its timely focus on the global jobs crisis, up to the just-concluded General Segment, which reviewed a wide range of vital issues, we have witnessed renewed energy and commitment across an array of critical issues,” he added.

Mr. Sha pointed to three broad accomplishments during the annual substantive session. The first of these was the Council growing stronger with each successive year.

The session’s Annual Ministerial Review has engaged a broad range of stakeholders, and has helped amplify the UN’s development agenda, he noted, while the Development Cooperation Forum has strengthened the Council’s role in broadening dialogue on development cooperation, and promoting more efficient collaboration among partners.

The second of these, according to Mr. Sha, was the recent Development Cooperation Forum provided strategic input on development cooperation and sustainable development.

“Contributions by all stakeholders – including national governments, parliamentarians and representatives of civil society and local government – were instrumental in producing action-oriented recommendations on development cooperation,” he noted.

The third broad accomplishment of this year’s session, said the Under-Secretary-General, was its high-level engagement by delegations, as well as the active participation of the global civil society network.

In his closing remarks to the meeting, ECOSOC’s President, Ambassador Miloš Koterec of Slovakia, noted that much has already been accomplished in 2012. “But we can scarcely afford to stop now. Pressing ahead requires, above all, significant reforms to the way the Council conducts business, perceives itself and is perceived by others,” he said.

He announced that the Council will convene a special meeting, at the ministerial level, on 24 September, on the margins of the high-level debate of the General Assembly.

Its bureau is also taking the initiative to shape a “new vision” for the Council, said the President. It is one that better aligns ECOSOC’s subsidiary bodies by addressing gaps in national and international governance; with sustainable development at the Council’s core; which places ECOSOC firmly at the centre of efforts to shape the UN’s post-2015 development agenda and its follow-up; and will deepen the Council’s already diverse constituencies.

“The tremendous experience, wisdom, and passion of all our stakeholders must be harnessed in our shared pursuit of a better world,” Mr. Koterec stated.

“That world – where the Economic and Social Council serves as a central hub for policy coherence and coordination; responds effectively to emerging global challenges; and exerts a degree of influence matched only by its inclusiveness – is within reach. “Let’s be bold. Let’s seize the moment.”

The 54-member Council coordinates the work of the 14 UN specialized agencies, 10 functional commissions and five regional commissions, receives reports from ten UN funds and programmes and issues policy recommendations to the UN system, as well as to Member States. It meets every year, alternating between New York and Geneva. 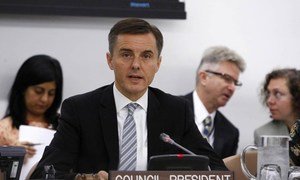 The United Nations Economic and Social Council’s (ECOSOC) high-level segment ended today with the adoption of a ministerial declaration calling for strengthened partnerships amongst Governments, the private sector and civil society to address issues that are crucial for providing full employment and decent work.