UN Photo/S. Waak
Some light and heavy weapons collected from fighters under a disarmament programme.
26 July 2012

With just two days left before the end of the United Nations Conference on the Arms Trade Treaty (ATT), Mr. Ban is also concerned about the “very limited progress in the negotiations” according to a statement issued by his spokesperson.

The four-week long Conference has brought together the UN’s 193 Member States to negotiate what is seen as the most important initiative ever regarding conventional arms regulation within the United Nations.

“The Secretary-General is encouraged by the efforts being undertaken by the President of the Conference who has been working with delegations day and night to try to build consensus on the elements of the ATT,” the statement said.

According to the statement, the Secretary-General “remains hopeful that the Conference will yield a robust and legally binding Arms Trade Treaty that will have a real impact on the lives of those millions of people suffering from the consequences of armed conflict, repression and armed violence.”

“He wishes to remind delegations that we owe it to all the innocent civilians who have fallen victim to armed conflict and violence, to all the children deprived of a better future and to all those risking their lives to build peace and make this a better world,” it added, noting that Mr. Ban stands ready to provide assistance to bring the Conference to a successful outcome.

In February, the heads of several UN agencies – including the UN Development Programme (UNDP), the UN Children’s Fund (UNICEF), the Office of the UN High Commissioner for Human Rights (OHCHR) and Office of the UN High Commissioner for Refugees (UNHCR) – called for a comprehensive arms trade treaty that requires States to assess the risk that serious violations of international humanitarian law and human rights law may be committed with weapons being transferred; includes within its scope all conventional weapons, including small arms; and ensures that there are no loopholes by covering all types of transfers, including activities such as transit, trans-shipment, as wells as loans and leases.

♦ Receive daily updates directly in your inbox - Subscribe here to a topic.
♦ Download the UN News app for your iOS or Android devices.
Arms 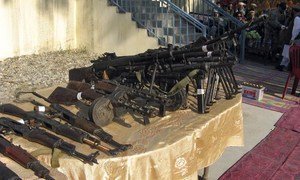 Ten United Nations agencies and their partners have urged Members States to place humanitarian concerns at the forefront of their discussions aimed at reaching agreement on a comprehensive and robust arms trade treaty.