UNESCO/Ron Van Oers
The ancient city of Aleppo in Syria is a World Heritage site.
26 July 2012

The Director-General of the UN Educational, Scientific and Cultural Organization (UNESCO), Irina Bokova, “urges all parties to respect and protect Syria’s great cultural legacy, which constitutes a source of identity and fulfilment for its people, and to abide by their international obligations in the area of culture,” according to a UNESCO news release.

Of particular concern to UNESCO are the reports of heaving fighting in Aleppo, which contains the historic Citadel of Aleppo, one of 962 properties listed on the World Heritage List for its outstanding universal cultural value.

Strategically positioned on historic trade routes linking East and West, the ancient city has conserved an astounding monumental heritage reflecting the diverse cultures of the peoples that have settled in the region over millennia, including the Hittites, Assyrians, Greeks, Romans, Umayyads, Ayyubids, Mongols, Mamelukes and Ottomans.

“Owing to the volatile security situation, it has not been possible to assess the extent of the damage to the ancient city of Aleppo and several other World Heritage sites, including the Crac des Chevaliers, Palmyra, the Ancient Villages in Northern Syria and Damascus,” UNESCO said.

The cultural agency is also concerned about the risks of looting and pillaging of cultural property, and has alerted the World Customs Organization and INTERPOL – as well as Syria’s neighbouring countries – to the potential threats of illicit trafficking in Syrian cultural objects.

In addition, Ms. Bokova has contacted Secretary-General Ban Ki-moon and the chair of the Security Council so that they can alert the Joint Special Envoy for the UN and the League of Arab States for the Syrian Crisis, Kofi Annan, to the importance of ensuring that the provisions of the international conventions regarding protection of cultural property are respected. 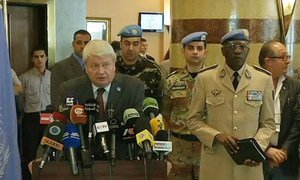 The United Nations peacekeeping chief announced today that half of the 300 UN observers in Syria have left the country, while adding that the crisis there remains “of utmost concern” and the world body will continue to promote a political solution.