The Security Council today extended the mandate of the United Nations peacekeeping mission in Côte d’Ivoire and the French forces that support it until 31 July 2013.

The Security Council today extended the mandate of the United Nations peacekeeping mission in Côte d’Ivoire and the French forces that support it until 31 July 2013.

In a unanimously adopted resolution, the Council also reduced the strength of the UN Operation in Côte d’Ivoire (UNOCI) by the equivalent of one battalion, in line with a recommendation by Secretary-General Ban Ki-moon.

The Council reiterated its continuing authorization for UNOCI to use all necessary means to carry out its mandate, including with respect to its priority concern, the protection of civilians.

It also decided that UNOCI should put an added focus on supporting the Government in disarmament, demobilization and reintegration of former combatants, as well as on security sector reform.

Furthermore, the 15-member body called on the Government to enhance dialogue with the political opposition and on the opposition parties to contribute to reconciliation, and urged it to ensure that all those responsible for serious human rights abuses and international humanitarian law violations were brought to justice.

In late 2010, Côte d’Ivoire was the scene of intense fighting after Alassane Ouattara won a disputed presidential run-off election, leading to months of deadly violence when the runner-up and incumbent Laurent Gbagbo refused to step down.

The West African nation continues to face a number of key post-crisis tasks, including the restoration of law and order, national reconciliation, the holding of legislative elections, and economic recovery. 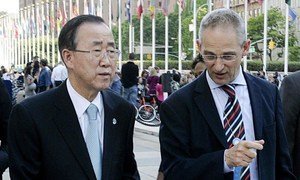 The United Nations Secretary-General, the President of the General Assembly and the Security Council have condemned “in the strongest possible terms” an attack in Côte d'Ivoire in which seven peacekeepers were killed.