The area used to cultivate coca in Colombia has risen three per cent in 2011 over the previous year, according to the United Nations Office on Drugs and Crime (UNODC), which added that the overall picture remained stable for the raw material used to produce the illegal drug cocaine.

The annual Colombia coca survey, supported by UNODC, is mainly based on data derived from satellite imagery and field surveys to measure the production of coca leaf.

The 2011 survey shows that some 64,000 hectares were used for coca crop cultivation last year. Also, while the area used for cultivation decreased in 14 of the country’s 24 departments, that trend did not offset increases in six other departments.

Almost two-thirds, or 62 per cent, of coca cultivation was concentrated in only four departments – Nariño, Putumayo and Cauca, bordering Ecuador in the west, and Guaviare, in the central-south area of the country, according to a news release issued by the agency.

Last year, the Government manually eradicated 34,170 hectares of coca bush and sprayed a total of 103,302 hectares. While aerial spraying remained at 2010 levels, manual eradication decreased by 22 per cent.

UNODC says that recent studies show that the coca leaf yield per hectare has decreased, probably because farmers are cutting back on fertilizers and agro-chemicals. Thus, potential cocaine production in 2011 remained stable at 345 tons, down one per cent from 350 tons in 2010.

In addition, the farm-gate value of coca leaf and derivatives – coca paste, cocaine base – in 2011 was estimated at $420 million, worth around 0.2 per cent of gross domestic product.

The agency notes that the average net income from coca of a farmer selling coca leaf is close to $2 per day, close to the threshold of extreme poverty set by the international community.

“This indicates that small-scale coca crop growers benefit very little from the lucrative cocaine business,” says UNODC, which has supported the Colombian Government in monitoring coca cultivation since 1999. 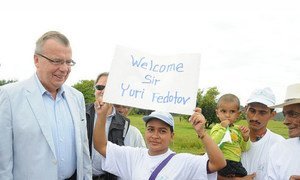 The head of the United Nations Office on Drugs and Crime (UNODC) has praised Colombia’s political commitment to fighting narcotics production and related crimes and financial support of the office’s technical assistance projects against the scourge in the region.