The United Nations human rights agency has condemned the attack that took place on a relocation camp for internally displaced persons (IDPs) in Côte d’Ivoire last week, stressing that the ethnically-motivated incident underscores the need to combat impunity for past abuses.

At least seven people were killed as a result of the attack on the camp in Nahibly, near the town of Duékoué in the country’s west, while 67 others were injured. The camp completely burned to the ground, and its 5,000 inhabitants fled.

A UN investigation team, including human rights officers, is being dispatched to the area today for a 10-day mission, according to the Office for the High Commissioner for Human Rights (OHCHR).

“The attack, which was clearly ethnically motivated, underscores the urgent need to combat impunity for past violations in Côte d’Ivoire,” an OHCHR spokesperson, Rupert Colville, told reporters in Geneva.

Mr. Colville noted that, at the height of the post-electoral crisis in March last year, two massacres took place in the Duékoué-Guiglo area. One reportedly resulted in the deaths of around 100 members of the Dioula ethnic community and, in another, some 244 mostly male members of the Guere ethnic group were found to have been killed during the capture of Duékoué on 28 March 2011 by the Forces Républicaines de Côte d’Ivoire (FRCI).

“It appears that the attack on the IDP camp in Nahibly was targeted at members of the Guere community, which is being blamed by the Dioula community for an armed robbery earlier in the day on Friday during which five Malinké [a sub-group of the Dioula people] were killed,” he said.

“More than a year after the March 2011 Duékoué ethnic violence, little progress has been made in advancing justice and accountability,” Mr. Colville added.

He noted that while more than 176 members of the pro-Gbagbo camp, aligned with former President Laurent Gbagbo, have been indicted for violations committed during the post-electoral crisis, no arrests have been made of supporters of current President Alassane Ouattara in relation to these crimes.

In late 2010, Côte d’Ivoire was the scene of intense fighting after Mr. Ouattara won a disputed presidential run-off election, leading to months of deadly violence when the runner-up and incumbent, Mr. Gbagbo, refused to step down.

OHCHR encourages the Government to prosecute perpetrators from all sides of the political divide, through a fair and impartial judicial process, to take the country forward.

“We welcome President Ouattara’s unequivocal condemnation of the crimes in Duékoué and call on him to ensure that the investigation into the events of last week is independent, impartial and that perpetrators are held accountable in a court of law,” said Mr. Colville. 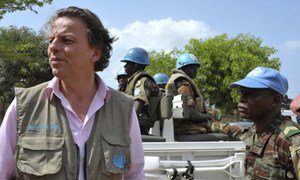 A United Nations top official today strongly condemned the attack carried out by some 300 individuals against a camp for internally displaced persons (IDPs) in Côte d'Ivoire, which resulted in seven deaths and injured 13 people.