19 July 2012
Deputy Secretary-General Jan Eliasson said today he intends to focus on development and political affairs as he sets out in his new role at the United Nations, an Organization to which he is no stranger, having served in various roles over the years.

“It is for me a coming home,” the veteran Swedish diplomat told his first press conference at UN Headquarters in New York after taking up the post earlier this month.

Mr. Eliasson has served in a number of UN positions, including Under-Secretary-General for Humanitarian Affairs, President of the General Assembly and Special Envoy for Darfur.

“We also need support from the outside – from regional organizations, governments, the private sector, civil society, academia, in order to mobilize the whole international community around the global challenges,” he added.

While there he had a number of conversations with leaders on a range of issues, including the situation between Sudan and South Sudan, the political instability in Mali, the food crisis in the Sahel region of West Africa, and the recent flare-up of violence in eastern Democratic Republic of the Congo.

Asked about the crisis in Syria, Mr. Eliasson described the situation there as “dramatic and dangerous.” He added that the UN is sending its Military Adviser, Lieutenant General Babacar Gaye, to the area, and that the Under-Secretary-General for Peacekeeping Operations, Hervé Ladsous, will also go there in the next few days.

The Security Council is expected to make a decision today on the future of the UN Supervision Mission in Syria (UNSMIS), which was set up to monitor the cessation of violence in the country, as well as monitor and support the full implementation of an international peace plan. The Missions’ 90-day mandate expires tomorrow.

“If we can play a meaningful role, with UNSMIS and its possible continuation, we will do so. But we will of course also watch the security situation extremely carefully,” said Mr. Eliasson. 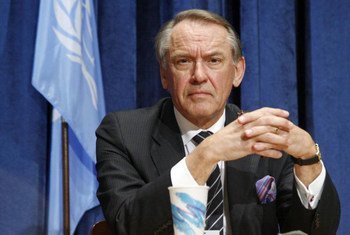 2 March 2012
Secretary-General Ban Ki-moon today announced the appointment of Jan Eliasson of Sweden, a veteran in the fields of diplomacy and foreign relations, as the new Deputy Secretary-General of the United Nations.