The top United Nations human rights official today said she is “seriously alarmed” by the current climate of intimidation against journalists and human rights defenders in Ethiopia due to an overly broad interpretation of laws concerning terrorism and civil society in the country.

“The recent sentencing of 20 Ethiopians, including prominent blogger Eskinder Nega, journalists and opposition figures, under the vague anti-terrorism law has brought into stark focus the precarious situation of journalists, human rights defenders and Government critics in the country,” the UN High Commissioner for Human Rights, Navi Pillay, said in a news release.

Charging journalists and political opposition members with terrorism and treason charges is seriously limiting their legitimate rights to freedom of expression and association, Ms. Pillay noted, and urged the Government to review its legislation, as well as its interpretation and application by the courts.

“The overly broad definitions in the July 2009 anti-terrorism law of Ethiopia result in criminalizing the exercise of fundamental human rights,” Ms. Pillay said. “Taken together, such laws have created a climate of intimidation.”

The human rights chief emphasized that the harsh sentences handed down to journalists and the excessive restrictions placed on human rights and non-governmental organizations are stifling dissent and undermining the freedom of opinion in Ethiopia.

She also noted that, since 2009, there has been a dramatic reduction in the number of organizations working on human rights issues, particularly on civil and political rights, which she referred to as “deeply disturbing.”

“Laws to combat terrorism must be consistent with the Government’s human rights obligations under international conventions as well as the African Charter on Human and Peoples’ Rights and other regional instruments to which Ethiopia is party,” Pillay said, reiterating that the United Nations is ready to help Ethiopia review its legislation. 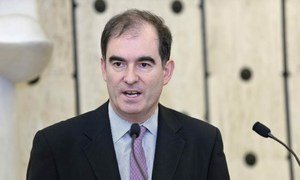