UN Photo/Jean-Marc Ferré
Kofi Annan, Joint Special Envoy of the UN and the League of Arab States on Syria.
17 July 2012

“I would hope that the Council will continue its discussions and hopefully find language that will pull everybody together for us to move forward on this critical issue,” Mr. Annan told reporters, following a meeting with the President of the Russian Federation, Vladimir Putin.

The Joint Special Envoy said he, along with Foreign Minister Sergei Lavrov, had a “very good” discussion with President Putin, focusing on what measures need to be taken to end the violence and the killing in Syria and how to proceed with a political transition there.

Mr. Annan arrived in Moscow yesterday for two days of talks. He has previously noted the importance of a united Security Council on the Syrian crisis, saying that “if the Council speaks with one voice, that voice is much more powerful than when it is divided.”

In addition, the Joint Special Envoy has repeatedly called on the parties to abide by a six-point peace plan he presented several months ago to end the Syrian crisis. The plan calls for an end to violence, access for humanitarian agencies to provide relief to those in need, the release of detainees, the start of inclusive political dialogue, and unrestricted access to the country for the international media.

The crisis in Syria has continued unabated since the uprising against President Bashar al-Assad began some 16 months ago. The UN estimates that more than 10,000 people, mostly civilians, have been killed in Syria and tens of thousands displaced.

“As I said earlier, we need to do whatever we can to stop the violence, to stop the killing, and the Council, I expect, will be sending a message out, that the killing must stop and the situation on the ground is unacceptable,” Mr. Annan said. “Hopefully, the Council will come together in a united manner and press ahead in search of peace.”

During their call, amongst other issues, they discussed the situation in Syria and the “imperative need” for an immediate halt to the violence there. As well, the Secretary-General stressed the importance of the Joint Special Envoy’s discussions in Moscow “given the escalating and alarming situation” in Syria.

“He called on Russia to use its influence to ensure the full and immediate implementation of the six-point plan and the Action Group communiqué, as well as of resolutions 2042 and 2043 of the Security Council,” the spokesperson said in a note to journalists.

Amongst other things, the Council's resolutions 2042 and 2043 dealt with the deployment of monitors, including those of the UN Supervision Mission in Syria (UNSMIS), which recently suspended the patrols of its observers due to the escalating violence on the ground.

Agreed on at a meeting in late June, the communiqué of the UN-backed Action Group on Syria called for the establishment of a transitional governing body, with full executive powers, as part of important agreed principles and guidelines for a Syrian-led political transition, as well as for all parties to immediately re-commit to a sustained cessation of armed violence, to fully cooperate with observers serving with UNSMIS, and to implement Mr. Annan’s six-point peace plan. 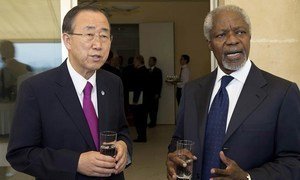 Secretary-General Ban Ki-moon and the Joint Special Envoy for the United Nations and the League of Arab States for Syria, Kofi Annan, today strongly condemned the attacks on Thursday in the Syrian village of Tremseh which reportedly resulted in over 200 deaths, adding that this violates the Government’s commitment to the six-point peace plan.