14 July 2012
United Nations observers who entered the Syrian village of Tremseh on Saturday confirmed that an attack took place there two days ago, involving the use of artillery, mortars and small arms.

The attack on Tremseh “appeared targeted at specific groups and houses, mainly of army defectors and activists,” said a statement issued by the spokesperson for the UN Supervision Mission in Syria (UNSMIS).

“There were pools of blood and blood spatters in rooms of several homes together with bullet cases,” stated the Mission, which also observed a burned school and damaged houses with signs of internal burning in several of them.

“On the basis of this preliminary mission, UNSMIS can confirm that an attack, using a variety of weapons, took place.”

Thursday's attack, which reportedly resulted in over 200 deaths, was condemned by UN officials as well as the Joint Special Envoy for the UN and the League of Arab States for Syria, Kofi Annan, who said the attack violated the Government's commitment to the six-point peace plan.

The Mission added that the number of casualties is still unclear and that observers plan to go back into Tremseh, located 25 kilometres north-west of the city of Hama, on Sunday to continue their fact-finding visit.

“UNSMIS is deeply concerned about the escalating level of violence in Syria and calls on the Government to cease the use of heavy weapons on population centres and on the parties to put down their weapons and choose the path of non-violence for the welfare of the Syrian people who have suffered enough.”

The UN estimates that more than 10,000 people, mostly civilians, have been killed in Syria and tens of thousands displaced since the uprising against President Bashar Al-Assad began last year.

Secretary-General Ban Ki-moon discussed the situation in Syria and the need for the violence to stop at once in a telephone call with Chinese Foreign Minister Yang Jiechi today. Mr. Ban called on China to use its influence to ensure the full and immediate implementation of the six-point plan and the communiqué resulting from last month's meeting of the Action Group on Syria which forged an agreement outlining the steps for a peaceful transition in the country. 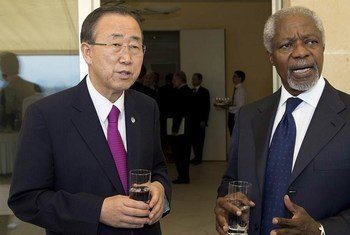 13 July 2012
Secretary-General Ban Ki-moon and the Joint Special Envoy for the United Nations and the League of Arab States for Syria, Kofi Annan, today strongly condemned the attacks on Thursday in the Syrian village of Tremseh which reportedly resulted in over 200 deaths, adding that this violates the Government’s commitment to the six-point peace plan.