The United Nations refugee agency today voiced concern over the number of people from Haiti and other Caribbean countries who have risked their lives trying to escape by sea from difficult living situations in their homelands.

“Continuing difficulties in Haiti following the 2010 earthquake are leading thousands of Haitians to flee their homeland each year, often in unseaworthy vessels,” said Melissa Fleming, spokesperson for the UN High Commissioner for Refugees (UNHCR). “Although no firm statistics exist, it is estimated that hundreds of deaths occur yearly as a result.”

On Tuesday, a woman drowned when a boat carrying more than 100 Haitian migrants ran aground near the Bahamas. In an earlier incident on 12 June, more than a dozen Haitians lost their lives in Bahamian and United States waters while trying to reach the shores of Florida, UNHCR reported.

“These events are a reminder of the extremes that people in difficult situations sometimes resort to,” said Ms. Fleming.

Inside Haiti, some 421,000 people are still living in camps in and around the capital, Port-au-Prince, and elsewhere in the country. The political situation remains tense, with increased levels of criminality and insecurity.

US Coast Guard data shows that since December over 900 people have been found on boats in rescue or interception operations, including some 652 Haitians, 146 Cubans and 111 people from the Dominican Republic.

Ms. Fleming said UNHCR is also concerned about countries returning people to Haiti, ignoring an earlier joint appeal by UNHCR and the Office of the High Commissioner for Human Rights (OHCHR) asking States not to return Haitians, for humanitarian reasons, without adequate individual protection screening.

“UNHCR continues to advocate for the inclusion of adequate protection safeguards for individuals apprehended at sea, and hopes that such tragedies can be avoided in the future through enhanced international cooperation in the region,” Ms. Fleming said. 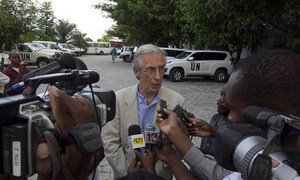 The United Nations and the Government of Haiti today voiced concern over a lack of resources to fund humanitarian services that are still required to help people in the Caribbean country recover from recent crises, including the 2010 earthquake and the cholera epidemic, and enhance preparedness ahead of the hurricane season.