13 July 2012
Secretary-General Ban Ki-moon and the Joint Special Envoy for the United Nations and the League of Arab States for Syria, Kofi Annan, today strongly condemned the attacks on Thursday in the Syrian village of Tremseh which reportedly resulted in over 200 deaths, adding that this violates the Government’s commitment to the six-point peace plan.

Mr. Ban said in a statement that he is “outraged” by reports of horrific mass killings in Tremseh in the province of Hama, noting that many civilians, including children and those fleeing shelling, were among those reportedly killed.

According to media reports, the village was bombarded by helicopter gunships and tanks and then stormed by militiamen who carried out execution-style killings. The victims were mostly civilians and, if confirmed, it would be the worst single incident of violence since the conflict began 16 months ago.

“The Syrian Government must halt this bloodshed and recognize that armed confrontation is the wrong course and must end now. I also urge the armed opposition to abide by its commitments under the six-point plan,” Mr. Ban said, adding that those responsible for these abuses must be brought to justice. He also called for an independent and impartial investigation into the killings and other abuses committed in Syria in the past 17 months.

In a statement released by his spokesperson, Mr. Annan said he was “shocked and appalled” by news coming out of Tremseh of intense fighting, significant casualties, and the confirmed use of heavy weaponry such as artillery, tanks and helicopters.

“This is in violation of the Government’s undertaking to cease the use of heavy weapons in population centres and its commitment to the six-point plan,” said the statement.

“I condemn these atrocities in the strongest possible terms. It is yet another reminder of the nightmare and the horrors Syrian civilians are being subjected to,” Mr. Annan said. “It is desperately urgent that this violence and brutality stops and more important than ever that governments with influence exert it more effectively to ensure that the violence ends – immediately.”

General Assembly President Nassir Abdulaziz Al-Nasser, in a statement issued by his spokesperson, called urgently on the Syrian authorities to provide the necessary protection and security to the UN observers so they can visit the site of the reported atrocities and verify reports.

UN observers in Syria have confirmed the use of mechanized units, indirect fire as well as helicopters in Tremseh yesterday, said the Head of the UN Supervision Mission in Syria (UNSMIS), General Robert Mood.

“From our presence in the Hama province we can verify continuous fighting yesterday in the area,” Gen. Mood told reporters in Damascus, adding that “UNSMIS stands ready to go in and seek verification of the facts, if and when there is a credible ceasefire.”

Under resolution 2043 adopted in April, the Council established UNSMIS – for three months and with up to 300 unarmed military observers – to monitor the cessation of violence in Syria, as well as monitor and support the full implementation of the six-point plan. In mid-June, UNSMIS suspended its monitoring activities due to an escalation of violence.

Gen. Mood underscored that in spite of the obstruction of the mission’s tasks due to the violence, UN observers are still engaging with parties on the ground in various provinces and facilitating local dialogues.

The UN estimates that more than 10,000 people, mostly civilians, have been killed in Syria and tens of thousands displaced since the uprising against Mr. Al-Assad began last year. 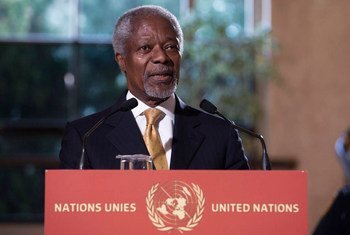 11 July 2012
The Joint Special Envoy for the United Nations and the League of Arab States for Syria, Kofi Annan, today reaffirmed the importance of implementing a six-point plan to halt the violence in the Middle Eastern country, and stressed that the international community must continue to work together to end the ongoing conflict there.