9 July 2012
The top United Nations envoy in Libya today said the country’s weekend election – its first free poll in almost half a century – was an “extraordinary achievement” and praised electoral authorities for organizing them efficiently, while also highlighting challenges an incoming government will face, foremost among them building security institutions.

“The mood in Libya is extremely positive with people taking enormous pride in having voted after nearly half a century and in how well they organized this vote for themselves,” the Secretary-General’s Special Representative and head of the UN Support Mission in Libya (UNSMIL), Ian Martin, told reporters at UN Headquarters in a video-conference.

Speaking from Tripoli, the Libyan capital, Mr. Martin highlighted the fact that the African Union, European Union, and Carter Centre, which fielded election observers, all made positive preliminary statements praising Libya’s High National Election Commission, not just for its transparency but for its flexibility given some security threats in eastern parts of the country.

“It was really the will of the people that prevailed in the determination of voters to protect their own polling centres, and the Commission then kept them open to allow people an opportunity to vote” Mr. Martin said.

Some 2.7 million people in the North African nation registered to vote for members of the new National Congress, which will be tasked with drafting a new constitution for Libya. More than 3,000 candidates ran for office, including more than 600 women.

The polls were the first free elections in decades in Libya, where Muammar al-Qadhafi ruled for more than 40 years until a pro-democracy uprising last year – similar to the protests in other countries in the Middle East and North Africa – led to civil war and the end of his regime.

Mr. Martin’s words echoed those of Secretary-General Ban Ki-moon, who congratulated the Libyan people earlier for Saturday’s election. Mr. Ban also expressed his appreciation to the candidates and political groups that contested the election in a peaceful and democratic spirit, stressing that the UN looks forward to working with the country’s new leaders as they address the challenges of drafting a constitution and building a secure and accountable state.

In his remarks to the media, Mr. Martin noted that the elections “must not blind any of us to the enormous challenges that still lie ahead,” particularly that of building security institutions.

The envoy has previously voiced concern over incidents of renewed fighting throughout Libya, and called on the authorities to address the causes of the conflicts and protect civilians.

In a briefing to the Security Council in May, he said that armed clashes in recent months between various groups have tested the reach and authority of the Government's security apparatus and ability to impose the rule of law.

He added that other public security matters, such as the integration or demobilization of revolutionary fighters and the control of weapons, in addition to human rights, transitional justice and national reconciliation, are among the other issues that need to be addressed during the North African country’s ongoing democratic transition.

With transitional deadline near, UN envoy urges Somalis to focus on country’s future 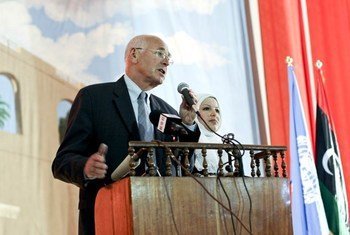 Ahead of weekend elections in Libya, UN envoy reiterates call for peaceful conduct

6 July 2012
On the eve of the elections to the National Congress in Libya, the top United Nations envoy to the country today urged all voters “to exercise their hard-earned democratic right.”