9 July 2012
Secretary-General Ban Ki-moon today extended his best wishes and congratulated the people of South Sudan on the first anniversary of their country’s independence.

“I extend my warmest greetings and best wishes to the Republic of South Sudan on the first anniversary of its independence. I had the honour of attending the independence ceremonies last in year in Juba, and was deeply impressed by the country’s commitment to peace,” Mr. Ban said in a message.

“The people of South Sudan have made tremendous sacrifices to reach this historic juncture, and I congratulate them for realizing their long-held aspirations,” he added. “May South Sudan enjoy greater well-being with each Independence Day, and may all its citizens live in harmony and peace.”

Mr. Ban’s message was read out by his Special Representative and head of the peacekeeping operation known as the UN Mission in the Republic of South Sudan (UNMISS), Hilde Johnson, at a ceremony today in Juba. The event was attended by various leaders and officials, including from neighbouring countries such as Uganda, Ethiopia, Kenya and Sudan, as well as from the African Union (AU), and South Sudan’s President Salva Kiir.

South Sudan became the world’s newest country on 9 July 2011. Its birth was the culmination of a six-year peace process which helped bring an end to the long-running conflict between South Sudan and Sudan, of which it was formerly a part of.

“South Sudanese can now proudly walk the world stage as citizens of a country that is a member of the United Nations and the African Union. They can now plan things for their children that they themselves could not dream of,” Mr. Ban said in his message. “Now, their sights are set clearly on the future – a future in which a democratic South Sudan strives to improve the living standards of its citizens and plays a constructive role on the world stage.”

However, while noting much had been achieved since independence, the Secretary-General also noted that a lot still needs to be done.

South Sudan is still dealing with unresolved issues stemming from its separation from Sudan, as well as other problems such as ethnic violence, humanitarian displacement, border demarcation, economic growth and the impact of raids by the notorious rebel group known as the Lord’s Resistance Army.

“The road ahead will not be without challenges, but I am confident that with the resilience of its people and the wisdom of its leadership, South Sudan will overcome any obstacles and succeed in becoming a prosperous nation, based on human rights and the rule of law, and living in harmony with its neighbours near and far,” Mr. Ban said.

In a recent interview, UNMISS’ Ms. Johnson had said that the relationship with Sudan was key to helping bring stability to South Sudan.

In his message, Secretary-General Ban acknowledged that “all South Sudanese are worried that relations with Sudan have deteriorated.” He noted that the United Nations is doing its utmost, in partnership with the AU, to help the Governments of the two countries settle all pending differences peacefully.

“UNMISS, the UN Mission, has had its mandate extended and will continue, with UN agencies, funds and programmes, to support the Government’s efforts to protect its civilians and consolidate peace throughout the country,” Mr. Ban said. “We are strongly committed to the work of building a thriving and stable South Sudan.”

Last week, the Security Council today extended UNMISS for 12 months, while focusing its mandate on civilian protection and the improvement of security in the African country. In a unanimously adopted resolution, the Council stressed the need for UNMISS to focus on its capacity-building efforts, and called on the Government of South Sudan to take greater responsibility for the protection of its civilians, and encouraged its cooperation with the Mission.

With transitional deadline near, UN envoy urges Somalis to focus on country’s future 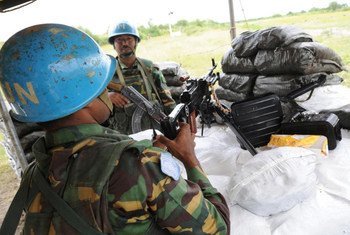 5 July 2012
The Security Council today extended for 12 months the United Nations Mission in South Sudan (UNMISS), while focusing its mandate on civilian protection and the improvement of security in the African country.