United Nations Secretary-General Ban Ki-moon has congratulated the people, Government and political parties of Timor-Leste for the peaceful and orderly manner in which the country held parliamentary elections on Saturday.

“The Secretary-General commends the national authorities, particularly the Technical Secretariat for Electoral Administration and the National Electoral Commission, for organizing and supervising the polling, and the National Police of Timor-Leste for maintaining a stable environment throughout the electoral process,” Mr. Ban's spokesperson added in a statement issued overnight.

According to media reports, preliminary results on Sunday indicate that Prime Minister Xanana Gusmao's party looked set to win the polls, with the main opposition party, Fretilin, in second place.

“The Secretary-General trusts that the same peaceful and democratic spirit which characterized today's elections will prevail during the vote counting and subsequent announcement of the election results,” Mr. Ban's spokesperson said.

Earlier this year, Timor-Leste celebrated its 10th anniversary since its restoration of independence in May 2002. The country also held presidential elections in April.

Mr. Ban's spokesperson said that that the successful conduct of the 2012 presidential and parliamentary elections further consolidate the progress made by Timor-Leste since the restoration of its independence.

“The Secretary-General reiterates the United Nations' continued commitment to supporting Timor-Leste in its efforts to build a peaceful and prosperous future,” the spokesperson added.

The UN Integrated Mission in Timor-Leste (UNMIT), which has been tasked with supporting the Government and relevant institutions with a view to consolidating stability and enhancing a culture of democratic governance, among other things, is due to depart at the end of the year. 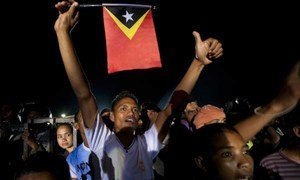 Secretary-General Ban Ki-moon has congratulated the people of Timor-Leste on the 10th anniversary of their country’s restoration of independence, hailing the “impressive advances” over the past decade, and noting that national institutions are now able to safeguard stability and democracy.