Noting gross violations of human rights and the ongoing violence there, the United Nations Human Rights Council today condemned the situation in Syria, and urged authorities to immediately implement a peace plan and grant unimpeded access to assistance organizations.

In a resolution, the Council “strongly condemned the widespread, systematic and gross violations of human rights, acts of violence, ongoing atrocities and indiscriminate targeting of civilians by the Syrian authorities,” while also condemning the crimes by members of the Government-controlled militia known as the Shabiha. It also reiterated an earlier call for an end to all violence by all parties.

In its resolution, the Council also condemned the continued extrajudicial killings, in particular the targeted killing of children, and the fact that they have been subject to arbitrary arrest, detention, torture and ill-treatment.

The resolution was adopted by a majority, with 41 votes in favour, three votes against it, and three abstentions.

The Council deplored the “alarming humanitarian and human rights consequences of the lack of implementation” of the six-point peace plan put forward earlier this year by the Joint Special Envoy of the UN and the League of Arab States for the Syrian Crisis, Kofi Annan; and it called for its urgent implementation by all sides.

The plan calls for an end to violence, access for humanitarian agencies to provide relief to those in need, the release of detainees, the start of inclusive political dialogue, and unrestricted access to the country for the international media.

In addition, the Council expressed deep concern about reports from the Independent Commission of Inquiry – which it had appointed – of serious human rights violations by both Government and opposition forces, and underscored the importance of the recommendations made by the Commission stating that the Syrian people should determine, within an international law framework, the mechanisms to achieve reconciliation, truth and accountability for the gross violations committed against them.

The UN High Commissioner for Human Rights, Navi Pillay, has previously called for the Security Council to refer the situation in Syria to the International Criminal Court (ICC), to ensure accountability for the serious abuses committed by both sides in the conflict. 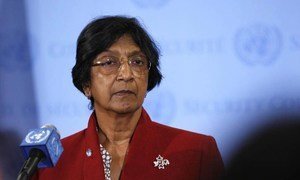 The United Nations human rights chief today renewed her call on the Security Council to refer the situation in Syria to the International Criminal Court (ICC), stressing the need to ensure accountability for the serious abuses committed by both sides in the ongoing conflict.