1 July 2012
Secretary-General Ban Ki-moon today voiced his concern over the worsening security and humanitarian situation in northern Mali, and by reports that mausoleums in the ancient city of Timbuktu have been destroyed.

“The Secretary-General calls on all parties to exercise their responsibility to preserve the cultural heritage of Mali,” said Mr. Ban's spokesperson in a statement. “Such attacks against cultural heritage sites are totally unjustified.”

Mr. Ban reiterated his support for the ongoing efforts of the Economic Community of West African States (ECOWAS), the African Union and countries in the region to help the people of Mali resolve the current crisis through dialogue.

Fighting resumed in January in northern Mali between Government forces and Tuareg rebels. The instability and insecurity resulting from the renewed clashes, as well as the proliferation of armed groups in that region, and a deepening crisis due to a coup d'état in March, have uprooted nearly 320,000 people, with many of them fleeing to neighbouring countries.

Last month, ECOWAS and the African Union requested a Security Council mandate authorizing the deployment of an ECOWAS stabilization force to ensure the protection of Malian state institutions and assist in upholding the territorial integrity of Mali and in combating terrorism. The request was discussed during a meeting between the Council and a high-level delegation two weeks ago in New York.

Yesterday, the Director-General of UN Educational, Scientific and Cultural Organization (UNESCO), Irina Bokova, expressed her distress and dismay over the destruction of three sacred tombs that are part of a World Heritage site in Timbuktu, Mali.

“Reports that the Mausoleums of Sidi Mahmoud, Sidi Moctar and Alpha Moya have been destroyed is extremely distressing,” Ms. Bokova said. “There is no justification for such wanton destruction and I call on all parties engaged in the conflict to stop these terrible and irreversible acts, to exercise their responsibility and protect this invaluable cultural heritage for future generations.”

According to UNESCO, Timbuktu was an intellectual and spiritual capital and a centre for the propagation of Islam throughout Africa in the 15th and 16th centuries. The 17 metre high pyramidal structure of the Tomb of Askia was built by the Emperor of Songhai in 1495, and bears testimony to the power and riches of the empire that flourished in the 15th and 16th centuries through its control of the trans-Saharan trade.

On Thursday, the World Heritage Committee had accepted the request of the government of Mali to place Timbuktu and the Tomb of Askia on UNESCO's List of World Heritage in Danger.

The list is designed to inform the international community of threats to the outstanding universal values for which a property has been inscribed on the World Heritage List, and to encourage corrective action. 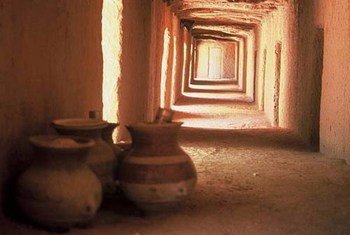 28 June 2012
The World Heritage Committee today accepted a request from the Government of Mali to place Timbuktu and the Tomb of Askia on the List of World Heritage in Danger.