“Today the international community has taken its cooperation to a stronger level, by being clearer and more specific,” said Joint Special Envoy for the UN and the League of Arab States on Syria, Kofi Annan, in his remarks to the Group in Geneva. “They have laid out a path that we hope the Syrian people can embrace and work with.”

In a statement, the Group called for all parties to immediately re-commit to a sustained cessation of armed violence, to fully cooperate with UN monitors, and to implement the six-point plan put forward by Mr. Annan without waiting for the actions of others.

The six-point peace plan calls for an end to violence, access for humanitarian agencies to provide relief to those in need, the release of detainees, the start of inclusive political dialogue, and unrestricted access to the country for the international media.

The Group also agreed on a set of principles and guidelines for a Syrian-led transition that meets the aspirations of the Syrian people, which includes the establishment of a transitional governing body that would exercise full executive powers and that would be made up by members of the present Government and the opposition and other groups.

“We are determined to work urgently and intensively to bring about an end to the violence and human rights abuses and the launch of a Syrian-led political process leading to a transition that meets the legitimate aspirations of the Syrian people and enables them independently and democratically to determine their own future,” Mr. Annan stressed, adding that for the transition to be successful “there must be a commitment to accountability and national reconciliation.”

Mr. Annan emphasized that the conflict must be resolved through peaceful dialogue and negotiation alone, noting that Action Group members are “opposed to any further militarization of the conflict.”

The Group, also agreed on actions that they would take to implement the steps and measures outlined in the statement, and to support Mr. Annan's work in bringing the relevant parties together.

“The Action Group members will engage as appropriate, and apply joint and sustained pressure on, the parties in Syria to implement what we have discussed,” Mr. Annan said. “The hard work starts now. We must work together to implement what has been agreed. We cannot do this alone. I hope all in Syria will embrace what has been laid out here and work with us to stop the killing and build a better future,” he added. 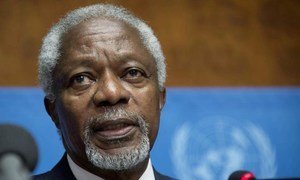 The Action Group for Syria will convene in Geneva, at the ministerial level, this Saturday, the Joint Special Envoy of the United Nations and the League of Arab States on the Syrian Crisis, Kofi Annan, said today.