More than 500 delegates, including government ministers and heads of civil society groups, international institutions and the private sector, will attend the high-level segment which will focus on boosting productive capacity, strengthening development cooperation and creating decent, sustainable work.

“Our goal is to spotlight sustainable economic growth models which not only promise job creation but are also inclusive and equitable, tailored to the specific needs of individual countries and have sufficient levels of social protection,” the President of the Council, Ambassador Milos Koterec of Slovakia, told reporters at a news conference at UN Headquarters.

The third biennial Development Cooperation Forum (DCF) will also take place during the high-level segment, featuring interactive, multi-stakeholder dialogues to generate ideas and solutions to a number of critical issues.

In addition, ministers and representatives will deliver policy messages during the Annual Ministerial Review (AMR) and will exchange approaches for the implementation of the Global Jobs Pact, adopted in 2009 by the UN International Labour Organization (ILO).

“We believe that these discussions are timely,” said Mr. Koterec. “The turmoil in the global economy has demonstrated that the world needs concerted action to get out of the crisis. No one country or region can lead on its own and policy coordination has become more complicated just as it has become more important.

“The global concern over jobs and sustainability are unifying themes for international cooperation. We will learn in the next few days how some countries are tackling these challenges while trying to meeting the internationally agreed goals, including the MDGs,” he added, referring to the global anti-poverty targets known as the Millennium Development Goals, which world leaders have pledged to achieve by 2015. 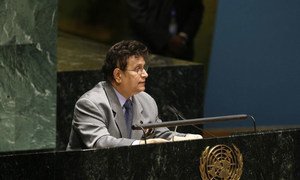 United Nations officials today stressed the need for partnerships across governments, the private sector and civil society to urgently tackle the challenge of job creation in post-conflict countries, especially for young people, who make up the bulk of these populations.