The Security Council today decided to permit four judges of the United Nations tribunal trying serious crimes committed during the 1994 Rwanda genocide to serve beyond the expiry of their terms of office so that the court can wrap up its work by the target date of December 2014.

The Security Council today decided to permit four judges of the United Nations tribunal trying serious crimes committed during the 1994 Rwanda genocide to serve beyond the expiry of their terms of office so that the court can wrap up its work by the target date of December 2014.

In a unanimously adopted resolution, the Council decided that Judge William H. Sekule of Tanzania, Judge Solomy Balungi Bossa of Uganda and Judge Mparany Mamy Richard Rajohnson of Madagascar may continue until the completion of cases that they began before the 30 June expiry of their tenure.

The Council also decided to extend until 31 December 2014 the service of the President of the International Criminal Tribunal for Rwanda (ICTR), Judge Vagn Joensen of Denmark, whose term was also to have expired on 30 June, in an effort to complete the court’s remaining work.

In addition, the 15-member body requested the Tribunal to report on the projected schedule for transferring its remaining functions to the so-called “Residual Mechanism.”

The Council set up the International Residual Mechanism in December 2010 and mandated it to take over and finish the remaining tasks of the ICTR when it is closed after its mandate expires. The ICTR branch of the mechanism will begin functioning on 1 July this year, and is set to conclude its work by the end of 2014.

The ICTR was created after the Rwandan genocide, when at least 800,000 Tutsis and politically moderate Hutus were killed during three months of bloodletting that followed the death of then president Juvenal Habyarimana when his plane was brought down over the capital, Kigali.

In other action today, the Council adopted a resolution in which it requested Secretary-General Ban Ki-moon to increase from eight to nine the size of the group of experts assisting the so-called 1540 committee that monitors a UN resolution seeking to prevent the proliferation of weapons of mass destruction.

Resolution 1540, adopted by the Council in 2004, imposes binding obligations on all States to establish controls preventing the proliferation of nuclear, chemical and biological weapons, and their means of delivery.

In addition to monitoring the resolution, the committee encourages greater international cooperation on issues related to the non-proliferation of weapons of mass destruction to promote universal adherence to existing non-proliferation treaties.

♦ Receive daily updates directly in your inbox - Subscribe here to a topic.
♦ Download the UN News app for your iOS or Android devices.
Rwanda|tribunal 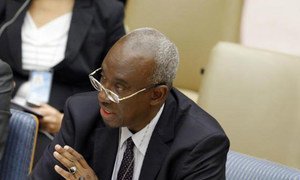 The Security Council today appointed a prosecutor for the mechanism set up in 2010 to finish the remaining tasks of the United Nations war crimes tribunals for former Yugoslavia and Rwanda when their mandates expire, while Secretary-Ban Ki-moon announced the appointment of the body’s president.