UN and partners appeal for $193 million to assist Syrian refugees

United Nations humanitarian agencies and their partners today appealed for $193 million to help the growing number of Syrian refugees in Jordan, Lebanon, Turkey and Iraq.

“The Governments and host communities of Iraq, Jordan, Lebanon and Turkey have shown tremendous generosity and hospitality to Syrian refugees,” said Panos Moumtzis of the UN High Commissioner for Refugees (UNHCR). “It is essential that the international community steps up its support for relief operations for refugees.”

The crisis in Syria has continued unabated since the uprising against President Bashar al-Assad began some 16 months ago. The UN estimates that more than 10,000 people, mostly civilians, have been killed in Syria and tens of thousands displaced.

The Joint Special Envoy of the UN and the League of Arab States on the Syrian Crisis, Kofi Annan, will convene a meeting of the Action Group for Syria in Geneva on Saturday to identify steps to secure full implementation of the six-point plan he has presented and relevant Security Council resolutions, including an immediate cessation of violence.

“I sincerely hope that this Action Group for Syria will be a turning point in our common efforts to address the crisis in Syria,” Secretary-General Ban Ki-moon, who will attend the 30 June meeting, told reporters at UN Headquarters today.

In the past three months, humanitarian agencies have registered an average of over 500 Syrian refugees per day. According to UNHCR, more than 96,000 Syrians are either registered or being assisted in neighbouring countries, with numbers doubling since March. The agency estimates that the figure could double again by the end of the year.

“Around 75 per cent of Syrian refugees are women and children. Most are entirely dependent on life-saving humanitarian assistance,” said Mr. Moumtzis, who is UNHCR’s Regional Coordinator for Syrian Refugees. To date, the appeal is only 26 per cent funded.

The appeal seeks to provide assistance to Syrian refugees in camps as well as technical advice to the Government of Turkey, which is hosting some 33,000 Syrians who fled the conflict, representing the majority of refugees.

In addition, the appeal would support the increasing number of Iraqi and Somali refugees who have fled Syria for towns and cities in Turkey.

The plan is the result of the coordinated efforts of 44 international and national agencies involved in responding to the needs of Syrian refugees in four countries. The UN agencies taking part include UNHCR, the UN Children’s Fund (UNICEF), the World Health Organization (WHO) and the World Food Programme (WFP).

The agencies had originally appealed for $84.1 million in March, and the revision comes as the number of refugees continues to rise.

“The majority of Syrians have left their homes and lives behind – living, at best, with host families and, at worst, share derelict houses with other refugee families,” said WFP Regional Director for the Middle East and North Africa Daly Belgasmi. “WFP is addressing the immediate food needs of these refugees as part of a UN joint effort to alleviate the suffering of tens of thousands of Syrian refugees.”

According to a news release issued by the agency, WFP has also scaled up its operations inside Syria to reach half a million people in need of food assistance and is preparing to further expand operations in July to reach 850,000 people affected by the current crisis. 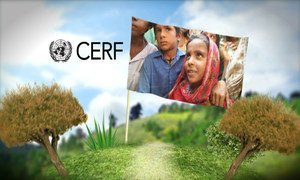 The United Nations humanitarian arm has provided over $9 million in fresh funding in recent weeks to assist Syrian refugees in Lebanon, Turkey and Jordan.