The resolve of Member States to implement the United Nations Global Counter-Terrorism Strategy is strong, but it requires action and results if the international community is to defeat this global scourge, the President of the General Assembly said today.

“Only through strong political will, and by implementation and delivery, can we realize our hopes of a world free of terrorism,” Nassir Abdulaziz Al-Nasser said as Member States began the third review of the Strategy.

Adopted by the Assembly in September 2006, the Strategy is based on four pillars: tackling the conditions conducive to the spread of terrorism; preventing and combating terrorism; building States’ capacity to prevent and combat terrorism and to strengthen the role of the UN system in that regard; ensuring respect for human rights for all and the rule of law as the fundamental basis for the fight against terrorism.

“The UN Global Counter-Terrorism Strategy is a watershed document in the international community’s fight against terrorism in all its forms and manifestations,” said Mr. Al-Nasser, noting that it is “comprehensive in scope, preventative in nature and integrated in approach.”

He voiced the hope that the two-day review will provide the necessary momentum towards the full implementation of the Strategy on the ground. In particular, he underscored the importance of regional cooperation in global counter-terrorism efforts.

“Several regions around the world have demonstrated the advantage that regional cooperation brings to counter-terrorism activities. We need to learn from those experiences, and see how we can use improved regional collaboration to strengthen counter-terrorism work, both at the national and international levels,” he stated.

“In short, this requires multi-national efforts that go beyond traditional and localized approaches. No nation, acting alone, no matter how powerful it is, can prevent every threat from being carried out.”

The UN’s counter-terrorism framework also includes the Counter-Terrorism Implementation Task Force, which facilitates coordination of anti-terrorism efforts with international, regional and sub-regional organizations and promotes coherence in the implementation of the Strategy at the national, regional and global levels. Members States can request assistance from the task force, especially in capacity-building. 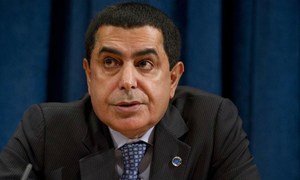