The rule of law is key to the implementation of the ‘responsibility to protect’ principle, often referred to as R2P, and the prevention of atrocities, a United Nations senior legal official stressed today.

“R2P represents an important commitment by the international community to protect populations from egregious crimes,” the Under-Secretary-General for Legal Affairs, Patricia O’Brien, said at a roundtable discussion on the R2P concept at the 55th annual meeting of the Russian Association of International Law in Moscow.

Ms. O’Brien underscored that the international community, through regional organizations and the UN, can assist States to build rule of law capacities that will make them less susceptible to R2P situations, including technical assistance, engagement on human rights, peacekeeping and peacebuilding projects.

“International assistance serves to reinforce and not to undermine national sovereignty while helping governments to provide additional protection and security to their populations,” Ms. O’Brien said.

She noted that laws such as those dealing with international humanitarian activities, refugees and the Rome Statue of the International Criminal Court (ICC) will provide the necessary structures to prevent large scale atrocities within a country’s territory.

In her remarks, Ms. O’Brien also touched upon several cases where the R2P principle has been invoked. These included Libya, and more recently Syria, where she said that despite measures taken to enforce Pillar II and III, violence has not ceased.

“To a very large extent, the Syrian authorities have disregarded their responsibilities,” she added. “However, the international community is focused and motivated, and, while much remains to be done, the doctrine of R2P is very much engaged.” 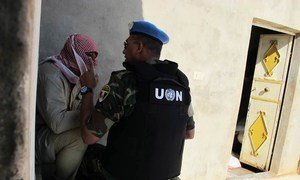