“Recent FMD outbreaks around the globe demonstrate that animal diseases have no boundaries, can have a devastating impact and require a global response,” the Food and Agriculture Organization (FAO) Regional Representative for Asia and the Pacific, Hiroyuki Konuma, said at the opening session of an FMD conference in Bangkok, Thailand.

Foot-and-mouth disease affects all cloven-hoofed animals, including sheep, goats, cattle, buffalo and pigs. It causes serious production losses and can be lethal, particularly to younger animals.

While the disease does not affect humans, FAO emphasized the negative impact the disease has on poor farmers whose livelihoods often depend on just a few animals. The disease leads them to hunger and economic ruin, presenting a serious threat in many regions. In addition, the agency estimates that the global annual cost of FMD in terms of production losses and the need for prevention by vaccination is approximately $5 billion.

To bring the disease under control, FAO has partnered with the World Organization for Animal Health (OIE) to lay out a detailed global strategy which involves the strengthening of veterinary services responsible for animal disease control.

The strategy also seeks to significantly contribute to poverty reduction by increasing trade opportunities and protecting the daily incomes of the one billion poor farmers worldwide who depend on livestock.

“The successful eradication of rinderpest, a joint effort by scientists, governments, donors, veterinarians and farmers, clearly shows that we can reduce and even eliminate the threat of major diseases,” said FAO’s chief veterinary officer, Juan Lubroth, in a news release.

“We could apply lessons learned and appropriate approaches when it comes to foot-and-mouth disease: better surveillance, coordination and control to reduce FMD outbreaks and finally eliminate the virus, to safeguard food security, animal health and human health,” he added.

The joint strategy has been prepared by FAO and OIE in consultation with experts, countries and donors, as well as with regional and international organizations. Particular emphasis has been put on regions of the world where the disease is endemic, including most of sub-Saharan Africa, the Middle East, and Asia. 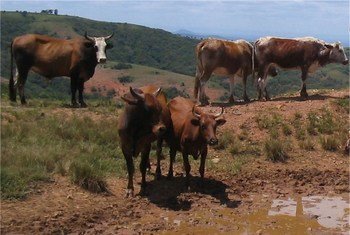 2 May 2012
The United Nations food agency today called for an increase in efforts to stop foot-and-mouth disease (FMD) from spreading in the Middle East and North Africa after a new case of the disease was detected in the Gaza Strip.