In a meeting with Lebanon’s Prime Minister today, a United Nations senior official today stressed the need to continue talks between the country’s different political movements.

“The commitment on the part of the different political movements in the country to continue dialogue is itself important, as is their reaffirmation of the commitments made in the Baabda Declaration to [show] restraint and support for the army, and to Lebanon’s neutrality with regard to regional conflicts,” said the UN Special Coordinator for Lebanon, Derek Plumbly, in a statement after his meeting with Prime Minister Najib Mikati.

Earlier this month, political leaders in Lebanon resumed the so-called National Dialogue. President Michel Sleiman had reportedly called for the resumption of the Dialogue, suspended since November 2010, in light of sectarian violence in Lebanon linked to the conflict in neighbouring Syria.

During the first meeting on 11 June, leaders of the Hizbollah-led March 8 bloc and the opposition March 14 coalition agreed to commit themselves to dialogue and avoid speeches that fuel sectarian hatred, after which they issued the Baabda Declaration – named after the Baabda Presidential Palace where the meeting was held.

Mr. Plumbly and Mr. Mikati also discussed the National Dialogue conclusion regarding the Palestinian camps located inside Lebanon, and the importance of addressing socioeconomic issues in those camps.

“I was impressed by the Prime Minister’s determination to achieve progress in this area, which is important both for the people of Lebanon and for Palestinians living there,” Mr. Plumbly said. “The United Nations looks forward to work closely with the government as it does so.”

During the meeting, Mr. Plumbly welcomed the calm in recent months in southern Lebanon, and condemned violence in the capital, Beirut, earlier this week, in particular the attacks on the Al Jadeed television station. He also welcomed the steps taken by Lebanese authorities to strengthen security measures and the rule of law across the country. 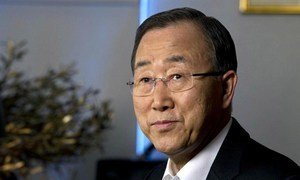