Citing a dramatic escalation in the fighting in Syria and ongoing human rights violations, the head of a United Nations-backed inquiry today urged the international community to act to put an end to the violence in the Middle Eastern country.

The chairperson of the Independent International Commission of Inquiry on Syria, Paulo Pinheiro, told the UN Human Rights Council in Geneva that gross violations of human rights are occurring regularly amid increasingly militarized fighting, which – in some areas – bears the characteristics of a “non-international armed conflict.”

In addition, military engagements have escalated dramatically in recent weeks and have extended to other regions not previously involved.

“The further militarization of the crisis will be catastrophic for the people of Syria and the region,” he warned. “The cessation of hostilities is of paramount importance. It is the civilian population, from various communities, who are suffering in this conflict, many paying with their lives.”

The UN estimates that more than 10,000 people, mostly civilians, have been killed and tens of thousands displaced since the uprising – part of the broader Arab Spring movement across North Africa and the Middle East – began in March last year.

Mr. Pinheiro added that as a result of the reported flow of new weapons and ammunitions to the Government forces and to the anti-Government armed groups, the situation risks becoming more aggravated in the coming months.

“The international community must not fail to exert a concerted effort to put an end to the violence,” he stated.

The Commission’s chairperson had recently returned from a three-day visit to the Syrian capital, Damascus, during which he met with Government officials, UN staff and members of the diplomatic community and civil society. Among the issues he discussed with the authorities is the investigation into the recent mass killings in Houla, where over 100 people were killed in one town during armed confrontations between Government and opposition forces.

“Inconsistencies in the available evidence hindered our ability to determine the identity of the perpetrators at this time. Nevertheless, we consider that forces loyal to the Government may have been responsible for many of the deaths,” Mr. Pinheiro said.

He noted that Government forces, and the associated militia known as Shabiha, have perpetrated unlawful killings, arbitrary arrests and detention, torture and other forms of ill-treatment. Particularly affected are children, who continue to suffer amid the ongoing violence.

In addition, despite the difficulties in collecting evidence of sexual violence, interviews conducted by the Commission indicated that Government forces and Shabiha have committed acts of sexual violence against men, women and children.

At the same time, the Commission considers it has “reasonable grounds” to believe that anti-Government armed groups have extra-judicially executed captured members of the Government forces, Shabiha, foreign fighters, Government supporters, suspected informers and/or collaborators.

“We are particularly concerned by reports that anti-Government armed groups have been using children as medical porters, messengers and cooks, exposing them to risk of death and injury” he added.

Today’s Human Rights Council meeting takes place as the Joint Special Envoy of the UN and the League of Arab States on the Syrian Crisis, Kofi Annan, announced that the Action Group for Syria will convene in Geneva this Saturday.

The objectives of the group are to identify steps and measures to secure full implementation of the six-point plan presented by Mr. Annan and relevant Security Council resolutions, including an immediate cessation of violence.

One of Mr. Annan’s deputies, Jean-Marie Guéhenno, also briefed the Council today, telling the 47-member body that many Syrians do not believe that a meaningful political process can be initiated so long as military operations continue, and thousands of people remain in detention and at risk of further abuse, torture, or summary executions.

“A political agreement can only be pursued if the people know that violence and human rights abuses are coming to an end,” he stated.

In addition, Mr. Guéhenno stressed that international unity is crucial and that time is running out.

“Syria is spiralling into deeper and more destructive violence,” he said. “The people of Syria desperately need the international community to come together now and exercise its full influence before it is too late.”

Mr. Guéhenno’s remarks were echoed by the UN High Commissioner for Human Rights, Navi Pillay, who presented the Secretary-General’s latest report on the human rights situation in Syria to the Council.

She told the Council the situation in Syria continued to deteriorate, regardless of a ceasefire agreement in April, and she urged on the parties to immediately stop all forms of violence.

“Despite some improvements on the ground, violence and killings, including armed clashes, through shelling and the use of explosive devices, continued throughout the Syrian Arab Republic, and the civilian population remained significantly insecure,” the Secretary-General’s report noted. “There were credible reports of ongoing serious human rights violations.”

The report was related to the Council’s resolution, adopted in March, in which demanded that the Syrian Government cease all violence, protect its people, and put an end to widespread and systematic abuses such as the killing and persecution of protesters. 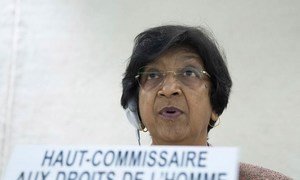 Warning of crimes against humanity and possible war crimes being committed, the United Nations human rights chief today called on the international community to overcome differences in order to end the violence and human rights violations in Syria.