UN Photo/Jean-Marc Ferré
Kofi Annan, Joint Special Envoy of the UN and the League of Arab States on Syria.

27 June 2012
The Action Group for Syria will convene in Geneva, at the ministerial level, this Saturday, the Joint Special Envoy of the United Nations and the League of Arab States on the Syrian Crisis, Kofi Annan, said today.

“The objectives of the Action Group for Syria are to identify steps and measures to secure full implementation of the six-point plan and Security Council resolutions 2042 and 2043, including an immediate cessation of violence in all its forms,” Mr. Annan said in a statement.

“The Action Group for Syria should also agree on guidelines and principles for a Syrian-led political transition that meets the legitimate aspirations of the Syrian people; and agree on actions that will make these objectives a reality on the ground,” he added.

The Joint Special Envoy said that he had sent on Wednesday invitations to the Foreign Ministers of the five permanent members of the Security Council – China, France, the Russian Federation, the United Kingdom and the United States of America – and Turkey, for the meeting this weekend.

“I look forward to a productive meeting this weekend, where we can all agree on concrete actions to end the cycle of violence and bring peace and stability to the Syrian people,” Mr. Annan said.

Amongst other things, the Council's resolutions 2042 and 2043 dealt with the deployment of monitors, including those of the UN Supervision Mission in Syria (UNSMIS), which recently suspended the patrols of its observers due to the escalating violence on the ground.

The Council established UNSMIS in April to monitor the cessation of violence in Syria, as well as monitor and support the full implementation of a six-point peace plan put forward by Joint Special Envoy Annan. 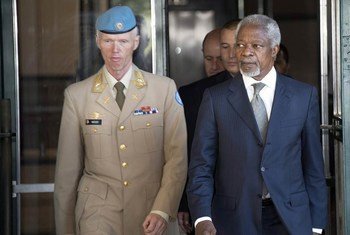 22 June 2012
The Joint Special Envoy of the United Nations and the League of Arab States on the Syrian Crisis, Kofi Annan, today cited the need to increase international pressure on the parties to end the ongoing conflict and ensure a political transition, stressing that the time to act is now.