The top United Nations envoy in Libya today stressed the importance of the equal participation of women in rebuilding the country, as he commended the number of women who have registered to vote and to stand for election in the upcoming legislative polls.

Some 2.7 million people in the North African nation have registered to vote for members of a new National Congress, which will be tasked with drafting a new constitution for Libya.

The polls, which are scheduled to be held on 7 July, will be the first free elections in decades in Libya, where Muammar al-Qadhafi ruled for more than 40 years until a pro-democracy uprising last year led to civil war and the deposing of his regime.

“The new Libya provides a new opportunity for Libyan women to articulate your political, economic and social aspirations,” the Secretary-General’s Special Representative and head of the UN Support Mission in Libya (UNSMIL), Ian Martin, said at an event held yesterday in the capital, Tripoli, to celebrate women’s participation in the electoral process.

“If women have equal opportunities to fulfil their political and socio-economic role, this contributes to development, democracy, nation-building and peace for all Libyans,” he added.

There are over 600 women candidates standing for election next month. Mr. Martin congratulated them, stating that they are role models not just for the women and girls of Libya, but also for the many people who will be watching them across the globe.

“It is inspiring for all of us to see you claiming your equal political and civic rights to build a new Libya,” he stated.

The envoy also paid tribute to civil society representatives who have advocated, through social media, demonstrations, petitioning and public for a, for further change in the daily lives of Libyans.

“I congratulate you for the contributions you have made to advance gender equality and women’s empowerment to date,” he said. “I commend your practical efforts to support women to register to vote, to educate women and men as to voting, and the support you are providing to women candidates.” 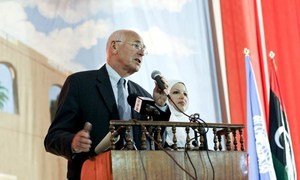 Describing it as a “milestone” achievement, the United Nations envoy to Libya today welcomed the successful conclusion of voter registration ahead of the country’s legislative election scheduled for next month.