22 June 2012
Reducing the use of paper, providing vehicles powered by biodiesel and electricity, and using recyclable materials are some of the practices that were pursued during the United Nations Conference on Sustainable Development (Rio+20) to minimize the forum’s environmental impact.

With nearly 50,000 people taking part in the Conference, the United Nations and the Brazilian Government emphasized the need to put sustainable measures in place that would avoid the use of pollutants and the production of waste – in line with the objectives of Rio+20.

“Normally, at a big conference like this one, we would have used more than 20 million sheets of paper,” said Magnus Olafsson, the Director of the Meetings and Publishing Division of the UN Department for General Assembly and Conference Management, who also heads the UN PaperSmart initiative. “But for Rio+20 we expect to use less than one million.”

In an interview, Mr. Olafsson stressed that “PaperSmart’ does not mean “paperless,” and while there are still large quantities of paper being distributed at the Rio+20 site, the amount of paper in circulation is far less than at previous conferences.

“For 67 years we have distributed statements of Member States in the media rooms. Reality shows that very few people actually take the statements with them, most of them would leave behind so at the end of the day you will have a big pile of unused statements,” Mr. Olafsson said, adding that paper statements also have the disadvantage of not allowing onscreen editing.

“This is not a fight against paper, it is rather a war against waste,” he emphasized. “The statements are all available in an online portal and if you want a paper copy you can request it.”

Mr. Olafsson said that there are still challenges that must be addressed to make a conference entirely paperless, such as access to digital devices for all participants, as well as income and generational gaps, which may limit the use of new technologies by some participants.

According to a news release issued by the Rio+20 Secretariat, the UN plans to follow the Conference’s PaperSmart model at future conferences.

The Brazilian Government also had several sustainable policies in place during Rio+20, such as providing free transport from various parts of Rio de Janeiro to the Riocentro Conference Centre, where the forum was being held.

A fleet of cars for official use was powered by biodiesel and gasoline mixed with ethanol. Another fleet of electric vehicles was provided by car manufacturer Renault-Nissan to transfer groups of UN staff to and from the Riocentro Conference Centre. In addition, spaces at Riocentro were equipped with bike racks.

Other measures included using power generators for the conference centre that run on fuel that is 20 per cent biodiesel, and using biodegradable cups and plates in the cafeteria. There were also vacuum toilets in certain areas, in order to reduce water wastage by up to 80 per cent; and some areas had rainwater re-use systems.

Delegates were also encouraged to offset their air travel emissions through a digital tool created in partnership by the UN Development Programme (UNDP), the Brazilian Government and the bank Caixa Econômica Federal, which allows participants to calculate greenhouse gas emissions from air travel and purchase certified emission reductions to compensate for them. 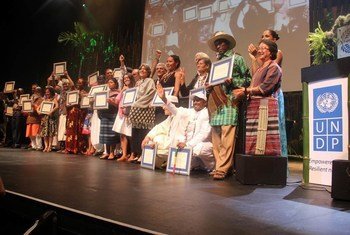 21 June 2012
Twenty-five local and indigenous groups were honoured on Wednesday evening by the United Nations for their outstanding contributions to sustainable development.