UNHCR/F.Juez
Members of a Syrian family register as refugees in northern Lebanon.
22 June 2012

The United Nations relief coordination agency today said that the humanitarian situation in Syria continues to deteriorate, with up to 1.5 million people in need of assistance.

“Civilians attempting to flee from fighting need urgent assistance and protection,” the UN Office for the Coordination of Humanitarian Affairs (OCHA) said in an update. “Local resources are stretched and there is restricted access to basic services in areas affected by fighting.”

“Visits by UN relief agencies to Homs and Idlib over the past two weeks have found that increasing numbers of people are leaving their homes and communities’ vulnerability is growing,” OCHA said, noting that in the Idlib Governorate, where fighting continues, the Syrian Arab Red Crescent (SARC) reports that 350,000 people now need assistance.

This is an increase of 150,000 people since the Government-led assessment of the humanitarian situation at the end of March, OCHA said. The 150,000 people include hundreds of families displaced from the Aleppo Governorate and from within the Idlib Governorate, and less than half of these people have received assistance.

Communities in the city of Homs have suffered increased violence in the past two weeks, OCHA noted. More than 100 public buildings are being used as temporary shelters for people who have fled their homes; and hundreds of people are reportedly trapped in the Old City, unable to leave because of ongoing violence.

OCHA said that a humanitarian pause negotiated by the International Committee of the Red Cross may provide an opportunity for civilians to leave and aid to be delivered.

“Local communities have so far provided the majority of assistance, including temporary housing, food and other basic items,” the UN agency said. “However, their ability to help has diminished and local donations to SARC are decreasing.”

Also today, the UN Children’s Fund (UNICEF) said that it needs additional funds of around $14 million for its response to the crisis in Syria. Along with its partners, UNICEF is providing assistance to Syrian children in need in areas such as health, nutrition, education and child protection.

In late March, the UN and its partners issued an appeal for $84 million, under the so-called Syria Regional Response Plan, to help Syrian refugees in Lebanon, Turkey, Jordan and Iraq, as well as future arrivals – UNICEF’s funding requirement from the plan is $7.4 million, with about $3.8 million received to date.

“UNICEF urgently requires additional funding to be able to continue to expand its programme outreach towards all Syrian children in need in the sub-region,” the agency said in a news release.

The UN estimates that more than 10,000 people, mostly civilians, have been killed in Syria since the uprising against President Bashar al-Assad began some 16 months ago. Tens of thousands have also been uprooted from their homes, with many having fled to neighbouring countries. 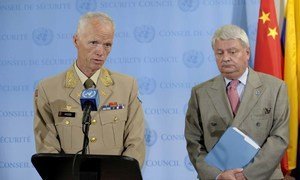 The suffering of the Syrian people is getting worse amid escalating violence in the country, the head of the United Nations mission there said today, just days after his observers came under direct attack resulting in the suspension of their monitoring activities.