Elephant poaching levels are the worst in a decade and recorded ivory seizures are at their highest levels since 1989, according to a report published today by the United Nations-backed convention on endangered species.

“We need to enhance our collective efforts across range, transit and consumer states to reverse the current disturbing trends in elephant poaching and ivory smuggling,” the Secretary-General of the Convention on International Trade in Endangered Species of Wild Fauna and Flora (CITES), John E. Scanlon, said in a news release on the report.

“While being essential, enforcement efforts to stop wildlife crime must not just result in seizures – they must result in prosecutions, convictions and strong penalties to stop the flow of contraband,” he added. “The whole ‘enforcement chain’ must work together.”

According to ETIS data, three of the five years in which the greatest volumes of ivory were seized globally occurred in 2009, 2010 and 2011. In 2011 alone, there were 14 large-scale ivory seizures – a double-digit figure for the first time in 23 years, when ETIS records were first compiled. They totalled an estimated 24.3 tonnes of ivory, more than in any previous year.

The sources of information have shown a very close correspondence between trends in elephant poaching and trends in large-scale ivory seizures, detecting essentially the same patterns at different points in the illegal ivory trade chain, CITES noted.

Large-scale ivory seizures – those involving more than 800 kilograms of ivory in a single transaction – typically indicate the participation of organised crime. Most of the ivory smuggling containers leave Africa through Indian Ocean seaports on the continent’s eastern coastline, primarily from Kenya and Tanzania, with China and Thailand the two primary destinations for illegal ivory consignments from Africa, according to the seizure data.

Some African and Asian countries have made significant efforts to enhance enforcement, CITES noted. For example, China conducted earlier this year a major operation which resulted in the seizure of more than 1,366 kilograms of ivory and the arrest of 13 suspects.

CITES said that the critical situation in Africa demonstrates the urgent need to implement the African Elephant Action Plan, which was created by all African elephant range States under the auspices of CITES in 2010. The plan envisages investing $100 million over three years into elephant conservation efforts.

The report’s findings, largely based on information submitted by governments, will be taken up at the 62nd meeting of the CITES Standing Committee, in Geneva from 23 to 27 July.

♦ Receive daily updates directly in your inbox - Subscribe here to a topic.
♦ Download the UN News app for your iOS or Android devices.
endangered+species 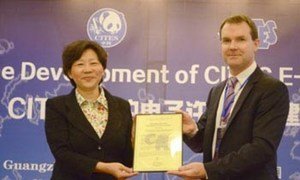