The challenges facing United Nations ‘blue helmets’ as they seek to keep the peace and protect civilians in some of the world’s most troubled places were highlighted today, as several of the world body’s top commanders took the floor during a Security Council meeting on the issue.

There are currently some 120,000 military, police and civilian personnel serving in 17 UN missions worldwide, the result of a global partnership that includes Member States, the UN Secretariat, host countries, regional organizations and UN partners.

Today’s multidimensional peacekeeping operations are called on not only to maintain peace and security, but also to facilitate political processes, protect civilians, assist in the disarmament, demobilization and reintegration of former combatants, support the organization of elections, protect and promote human rights, and assist in restoring the rule of law.

“The peacekeeping environment is becoming increasingly complex and challenging and is coming under increasing scrutiny,” the Force Commander of the UN Organization Stabilization Mission in the Democratic Republic of the Congo (MONUSCO), Lieutenant General Chander Prakash, told the Council.

“When one thinks of missions in DRC [the Democratic Republic of the Congo], South Sudan and Darfur, it is very evident that the business of military peacekeeping is now a specific and demanding affair in its own right, especially when it comes to the priority mandated task of the protection of civilians,” he stated, adding that protection of civilians requires peacekeeping forces to be agile, operate in difficult terrain and under risky and demanding situations.

“Not all contingents find themselves optimized to be able to effectively perform in that kind of scenario for reasons of training, equipment and even mental psyche,” he added. “Some peacekeepers still arrive with a mindset and orientation of peacekeeping being a soft operational tour.”

The mandate of MONUSCO, which took over from an earlier UN peacekeeping mission in July 2010, includes the protection of civilians, humanitarian personnel and human rights defenders under imminent threat of physical violence and to support the Congolese Government in its stabilization and peace consolidation efforts.

“We continue to find that peacekeeping of today, when it comes to protection of civilians under imminent threat, is a fine balance between prompt and robust action required from a soldier in uniform to a person who cares and nurtures vulnerable civilian community in his area of operational responsibility,” Lt. Gen. Prakash noted.

The protection of civilians is also a key component of the mandate of the UN Mission in South Sudan (UNMISS), which the Council established last year after South Sudan became independent from Sudan, six years after the signing of the peace agreement that ended decades of warfare between the north and the south.

However, the peace between the two countries has been threatened recently by clashes along their common border and outstanding post-independence issues that have yet to be resolved.

The Mission’s Force Commander, Major-General Moses Bisong Obi, said that UNMISS is tasked with providing support to the Government of South Sudan as it fulfils its responsibility to protect civilians. UNMISS also has a responsibility to protect civilians in imminent threat of danger when the Government is not doing so, he added.

He noted that there is a perception among the people of South Sudan that UNMISS is failing in its mission to protect civilians since it is “apparently doing nothing” to prevent bombing by the Sudanese Armed Forces of civilians near the border.

“Of course we cannot do this, other than report what we see to New York, for the Security Council to take action, as getting into direct conflict with another Member State falls outside our mandate,” said the Major-General.

Much effort has been made, including organizing seminars and various other outreach programmes, to explain the Mission’s mandate to the people of South Sudan, he added.

In his remarks to the Council, the Force Commander and head of the UN Interim Force in Lebanon (UNIFIL), Major-General Paolo Serra, highlighted the fact that the success of his Mission is contingent on effectively addressing the root causes of the conflict between Israel and the Lebanese group Hizbollah.

Among its tasks, UNIFIL cooperates with the Lebanese Armed Forces so they can fulfil their security responsibilities under resolution 1701, which ended the month-long fighting between Israel and the Lebanese group Hizbollah over the summer of 2006.

“Resolution 1701 is just a tool which can only be effective if the political will of the parties involved is translated into action,” said Maj.-Gen. Serra. “It will thus be vital to take advantage of the window of opportunity that UNIFIL’s presence has created, to make progress towards the establishment of a permanent ceasefire and long-term solution of the conflict.”

He added that, ultimately, UNIFIL’s success is dependent on success in the political context. “As a peacekeeping operation, UNIFIL supports diplomatic efforts to reach a political solution, but it cannot be the substitute for political progress,” he said. 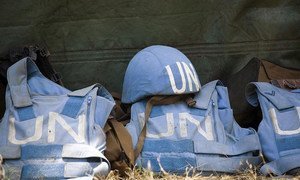 The United Nations today saluted the military, police and civilian personnel who serve in some of the world’s most dangerous places, and paid tribute to the memory of those colleagues who made the ultimate sacrifice while serving as UN peacekeepers.