The suffering of the Syrian people is getting worse amid escalating violence in the country, the head of the United Nations mission there said today, just days after his observers came under direct attack resulting in the suspension of their monitoring activities.

“I made that decision based on the risks on the ground and based on the fact that risks made it extremely difficult to implement mandated tasks,” the head of the UN Supervision Mission in Syria (UNSMIS) and Chief Military Observer, Major-General Robert Mood, told reporters after a closed-door meeting with the Security Council.

Major-General Mood said UNSMIS’ observers were working in very difficult circumstances in which they faced direct targeting and violence, including shelling, small arms fire and other incidents.

At the same time, he noted that the suffering of men, women and children in Syria, some of them trapped by fighting, is “getting worse.”

The Chief Military Observer said the decision to suspend the monitoring activities of UNSMIS is being reviewed on a daily basis, and that the first condition for the suspension to be lifted would be a “significant” reduction in the violence. In addition, there needs to be a commitment by both the Government and the opposition to the observers’ safety and security, as well as their freedom of movement.

“The Government has expressed that very clearly in the last couple of days. I’ve not seen the same clear statements the opposition yet,” Major-General Mood said.

The Security Council established UNSMIS in April to monitor the cessation of violence in Syria, as well as monitor and support the full implementation of a six-point peace plan put forward by the Joint Special Envoy of the United Nations and the Arab League for the Syrian Crisis, Kofi Annan.

“UNSMIS remains an indispensable tool to help the Syrian population and to help in the identification, and eventually the implementation, of a political solution,” the Under-Secretary-General for Peacekeeping Operations, Hervé Ladsous, told reporters.

Mr. Ladsous – who also attended the Council meeting – added that the six-point plan currently remains the only way for finding a solution to Syrian crisis, which has claimed the lives of more than 10,000 people, mostly civilians, since the uprising against President Bashar al-Assad began some 16 months ago.

“There is no other plan, no other game in town – there’s no ‘plan B,’” Mr. Ladsous said. “The six-point plan of Kofi Annan remains the reference, the framework for a settlement of this dramatic crisis.” 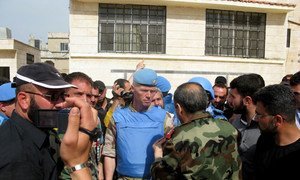 The chief United Nations observer in Syria has appealed to the parties to enable civilians trapped by the escalating violence to leave conflict zones.