UN Photo/JC McIlwaine
Assistant Secretary-General Oscar Fernandez-Taranco briefs the Security Council on the situation in Israel and the Palestinian territories.

19 June 2012
A top United Nations official today stressed the need for Israelis and Palestinians to renew dialogue and make real progress towards a two-State solution, warning that recent developments threaten to roll back the gains made in recent months.

“The earlier positive environment brought about by the quiet engagement between the parties appears to be challenged,” the Assistant Secretary-General for Political Affairs, Oscar Fernandez-Taranco, said in a regular monthly briefing on the Middle East to the Security Council.

“The latest announcements related to settlements are an added setback. As we speak, there are ongoing intensive efforts to avoid a renewed deadlock,” he added.

Earlier this month, Israeli Prime Minister Benjamin Netanyahu announced the construction of some 850 settlement units in several West Bank settlements, Mr. Fernandez-Taranco noted. The timing coincided with efforts to reach agreement with Israeli settlers to relocate five housing units in the settlement of Beit El that were built on private Palestinian land.

“We thus strongly encourage them to urgently consider taking the necessary constructive steps that would allow them to renew the meetings between their negotiators and work towards resumed direct negotiations,” said Mr. Fernandez-Taranco, adding that only a direct and meaningful dialogue can help restore belief in a negotiated peace.

“Given the dramatic developments in the region, progress on the Israeli-Palestinian track is of even greater urgency and would have an important positive impact on the region,” he said.

He also reported that clashes between Israeli settlers and Palestinians continued in the West Bank over the past month, as did the demolition of Palestinian structures in the area.

In addition, the relative calm that prevailed in Gaza since April was disrupted with a series of recent incidents. Overall, a total of 15 rockets and 27 mortar shells were fired from Gaza into Israel, while the Israel Defense Forces conducted seven incursions and 14 airstrikes into Gaza, resulting in nine Palestinian militants killed and nine injured, and 15 Palestinian civilians injured.

While some “significant” progress was made toward lifting the five-year-old Israeli blockade of Gaza, much more needs to be done, Mr. Fernandez-Taranco said. 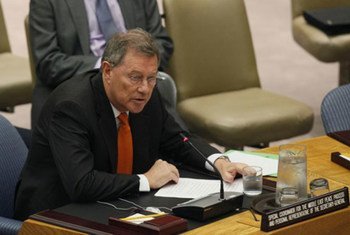 7 June 2012
A top United Nations envoy today reiterated that all settlement construction in the occupied Palestinian territory represents a breach of international law, after the Israeli Government announced it will build 300 new units in the Beit El settlement.