UNHCR/K. McKinsey
A boy from Myanmar’s northern Rakhine state at a refugee camp in Bangladesh.

19 June 2012
United Nations relief agencies are responding to the humanitarian situation in Myanmar’s northern Rakhine state, in the wake of violence there which has displaced thousands of people.

“WFP has reached more than 66,000 displaced people with emergency food supplies in the past week, delivering rations of rice, beans and cooking oil,” the UN World Food Programme (WFP) said in a news release. “WFP has about 2,800 metric tons of food in four warehouses in the region, ready to be distributed to the affected population.”

Serious inter-communal disturbances took place in Rakhine state, in the country’s west, earlier this month. The disturbances led to the Government declaring a state of emergency there, with the UN also temporarily relocating, on a voluntary basis, some of its staff based in the towns of Maungdaw and Buthidaung, as well as Rakhine state’s capital, Sittwe.

According to media reports, the violence, between ethnic Rakhine Buddhists and Rohingya Muslims, left at least a dozen civilians dead and hundreds of homes destroyed. The Secretary-General’s Special Adviser for Myanmar, Vijay Nambiar – who was in the south-east Asian nation around the time of the disturbances – has called for an investigation into the violence.

The Myanmar Government has requested urgent humanitarian assistance for the affected people in Maungdaw, Buthidaung and Sittwe, with food, shelter and medical assistance urgently required. A full UN assessment mission is being organised, and it is expected to provide a clearer picture of the extent of humanitarian needs in the affected area.

“At this stage, WFP estimates there are about 90,000 displaced people in need of assistance as a result of the recent clashes – WFP is currently finalizing plans for a three-month food assistance operation that will require additional support from donors,” WFP said.

The agency has completed food distributions in Sittwe, Maungdaw and Buthidang, as well as the town of Rathedaung. It said the most significant obstacle it is currently facing is access, with poor roads and bridges proving to be a particular constraint, and some displaced populations only reachable by using small trucks. WFP expects to scale up operations further in the coming days.

A spokesperson for Office of the UN High Commissioner for Refugees (UNHCR) today said that the situation in Rakhine state remains tense, with reports of sporadic incidents and violence, and initial government estimates of at least 48,000 people displaced by the recent disturbances.

“We expect this number to continue to grow as further information becomes available,” a UNHCR spokesperson, Adrian Edwards, told a media conference in Geneva. “The destruction of property appears to be widespread. Myanmar authorities indicate that as many as 1,600 houses may have been destroyed in the riots.”

As part of the overall UN response to the request from Myanmar authorities for assistance, UNHCR is providing shelter material and basic aid items, such as blankets, mattresses and other essential household items, to all affected communities.

“At present, we can meet the immediate humanitarian needs of some 2,000 families with kits containing plastic sheeting, kitchen sets, blankets and mosquito nets,” Mr. Edwards said.

In Bangladesh, UNHCR continues to monitor developments along its border with Myanmar, in light of reports of boats carrying people from Myanmar arriving in Bangladesh. After a lull over the weekend, seven boats carrying 128 persons arrived yesterday.

“UNHCR continues its dialogue with the Government of Bangladesh on the management of these arrivals,” Mr. Edwards said. “The Government has however maintained their position of keeping the borders closed. 139 persons were pushed back from Bangladesh by border authorities yesterday.” 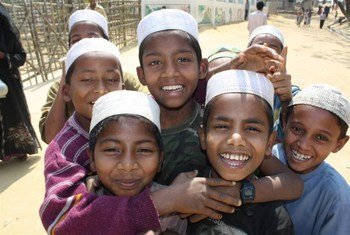 15 June 2012
The United Nations top envoy for Myanmar has called for an investigation into violence that recently took place in the country’s Rakhine state.