World leaders, along with thousands of participants from governments, the private sector, non-governmental organizations (NGOs) and other groups will come together from 20-22 June in Rio de Janeiro, Brazil, to take part in the UN Sustainable Development Conference (Rio+20).

In our Seven Issues, Seven Experts series UN officials tell us more about the key issues that will be discussed during the conference and how we can contribute to make our planet more sustainable.

In the fourth installment, the UN News Centre spoke with the Chief Development Strategist at the International Fund for Agricultural Development (IFAD), Carlos Sere, about the role of hunger and obesity, and why small farmers are the key to ensuring food security.

UN News Centre: What is the global food situation at the moment?

Carlos Sere: The food situation in the world is that we have a rapidly growing population, rapidly growing incomes, changing consumption patterns, people eating more animal products, vegetables, fruits, oils, and all of this is compounding to a very rapid increase in the total amount of food needed.

A sample of some underutilized indigenous foods. Photo: FAO

At the same time, the resources of the world are finite and we’re getting more and more to the limits of what we can do. So this means that it’s getting tighter, if you want, and therefore we have seen very high volatility in the recent past. So a drought in Australia or Russia would rapidly increase the price of wheat, especially because there are no large buffer stocks to control the markets. We took food for granted for many years, but right now food has become a very critical and strategic issue.

One other very important dimension which has changed is the fact that due to the rapid increase in oil prices, the world is looking at renewable energy sources and a lot of the renewable energy right now is bio-ethanol produced from corn. So we are now connecting the food market and the energy market. All of that adds a lot of volatility.

A mother shops for food at an outdoor market. Photo: World Bank/C. Carnemark

Carlos Sere: Well, fundamentally, countries used to think that if they didn’t have a good harvest in their own countries they could buy it in the world market. Suddenly, with the food crisis in the last few years they realized that sometimes even if you want to buy it, there are countries that are putting export bans. So there is some comeback to think more about self-sufficiency in food rather than just having the money to buy food, which was thought to be good enough.

UN News Centre: What are the most pressing issues that governments need to act on regarding food security?

Carlos Sere: Well, on the one hand, in most developed countries, the basic food and the calories have become very cheap and we find lots of people are consuming those types of empty calories. This is very much related to consumption patterns which are leading to obesity. We used to say this is just a developed country problem, but we are finding out that, more and more, the consumption pattern with this high-density energy food is also something we’re seeing in the middle classes of developing countries. So this is really becoming a very significant problem.

At the same time, we do have the issue of malnutrition still remaining and it is largely not that we do not produce enough food, but that these people do not have incomes to buy the food they need. It is an issue closely related to nutrition and poverty, not just an issue of production. Obviously, if we can keep prices low, it’s easier for more people to have access to it. This is why food price volatility is seriously bad for the poor, who spend a lot of their income on food.

A local farmer harvests sorghum produced from seeds donated by the Food and Agriculture Organization through the "Improving Seeds" project. Photo: FAO

It is also an issue - particularly the obesity side of it - that has to do with consumption patterns and education, which are very difficult to change. This needs to be addressed by governments.

UN News Centre: Can you give an example of a project that is succeeding in ensuring food security?

Carlos Sere: The right to food and to stay healthy and productive - this entails a lot more than just producing food. It is an issue of producing healthy food, of having income to buy that food, of having the education to know how to consume that food, etc. So it’s quite a complex set of issues and we cannot expect one individual project to solve this.

It’s really a much more paradigm-related issue of making sure we develop the right approaches to address the different parts, and we can only do that in partnership. That’s really the challenge. It involves producing the food sustainably. For example, there is a strong interest today in reducing food losses because we realized that limited resources don’t allow us, as in the past, to produce food and tolerate certain levels of losses because food is now more expensive. So it is more interesting for the industry to reduce food losses.

There is also an increasing interest in thinking about how to convey the messages of stopping over consumption. There are all sorts of initiatives such as meat-free Mondays, hospitals dealing only with certain types of food... there’s a whole array of interventions. Where we really are challenged is to put this together in a broader way. The world is full of very interesting pilot projects and exploratory efforts and really thinking about the scaling up of what’s working seems to be absolutely critical.

We’re investing a lot of energy into running all these pilot projects but probably not putting enough into concerted efforts.

UN News Centre: Is there a specific goal for Rio+20 regarding food security and sustainable agriculture?

Smallholder farmers control a very significant part of the land, the water and the labour in developing countries. It is absolutely essential to think of this big resource when you’re thinking about food. Many people frequently forget that and consider smallholder farmers just as a social issue.

We’re emphasizing that it is an absolutely critical component of sustainable world and land use, not just of the food these people produce, but they control a lot of the land which provides other environmental services, for example, carbon sequestration. We are really trying to make sure that smallholder farmers remain central in the new sustainability paradigm.

UN News Centre: What can the public do to contribute to food security and sustainability?

Carlos Sere: People making individual decisions of what they consume, of how they live, are obviously important. But the most important part is good governance of the political processes which lead to these decisions. Engaging in the political process, in the debate, understanding these issues, and making sure that the views from the population are brought into these processes... that, I think, is what really would make a difference.

If we can get the right policy environment and ensure that the right type of policies are put in place… that will have a major impact on people’s lives.

With help from the Food and Agriculture Organization, Guyana has carried out research and produced a high-yielding variety of rice. UN Photo/Ciganovic

UN News Centre: What do you think will be the main challenge that food security and agricultural sustainability will face in Rio+20?

Carlos Sere: I would say that the real challenge for Rio is that we do realize we need to work in complex partnerships. We have all tried to do our best in our sectors, some of us work in agriculture, others work in environment, others work on water, etc. The real challenge is we realize that in the future these sort of simple sectoral approaches won’t work. If we want to deal with poverty, we need to deal with agriculture, with social policies, with the environmental dimensions, because they’re all inter-related.

I think our challenge in Rio is to think in those terms, find new ways to get the governance of these processes to function across sectors and still find ways to do that in a manageable way. Because the world is complex but as human beings we only have a certain capacity, a span of what we can manage. Thinking up new ways in which, through partnerships and collaboration, we find ways to handle these complexity in a better way than what we have done up to now, that’s the real big challenge for Rio. 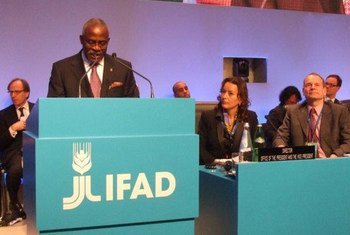 22 February 2012
A top United Nations official today committed to pull up to 90 million people out of poverty by 2015 and help small farmers and all those in rural areas to realize their potential in eliminating hunger and promoting development.